While EEGs are the standard of care for epileptic patients in high-income countries, low- and middle-income countries struggle with access to EEGs due to limitations in resources, manpower, and expertise. The Smartphone Brain Scanner-2 (SBS2) is a potential mobile solution to provide diagnosis, classification of seizure types, and appropriate selection of AEDs for people with suspected epilepsy in these settings. Instead of setting up large stationary EEG facilities, medical personnel can now consider investing in a $300 USD 14-electrode EasyCap headset to be used wirelessly with the SBS2 app on a mobile device. We have previously introduced other mobile options such as the Wave Technology Group’s mobile app for real-time seizure monitoring, BioSignal Group’s microEEG device, and NeuroVigil’s iBrain Device.

McKenzie et al tested SBS2 against the standard Xltek EEG for detection of epileptiform abnormalities amongst 205 participants with suspected epilepsy in Bhutan between 2014 and 2015. The study was intended to mimic situations in low- to middle-income countries where SBS2 tests would be run by non-specialists who were only given a 1-hour training. At the start of the recording, the impedance of all electrodes was below 5 kO; the raw EEG data were obtained with a sampling rate of 128 Hz, and were wirelessly transmitted to a receiver module connected to the mobile device. Each standard and SBS2 EEGs was analyzed by two neurologists. 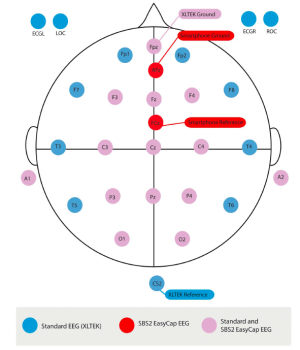 Although the authors of the study reckoned that inter-rater reliability between neurologists’ interpretations can be poor in nature regardless of the type of EEG used, the low inter-rater reliability from a panel of only 4 neurologists and the low sensitivity makes it difficult to get a large buy-in for the SBS2 app at this stage. Users can expect this solution to be a considerable compromise compared with the standard clinical EEG. If further studies demonstrate more acceptable performance on this setup, it could be a very convenient and cost-efficient solution for resource-limited settings.