A fertility app that utilizes algorithms to help with getting pregnant

A medical app by Swedish developers was recently certified by European testing organization Tüv Süd as a reliable form of birth control. Launched in 2014, Natural Cycles employs user input, a thermometer, and an algorithm to empower women to take control of contraception naturally and, according to a clinical study, as effectively as birth control pills.

We’ve reviewed pregnancy apps before that help clinicians counsel women pre-pregnancy, apps that help with birth control adherence, and birth-control prescribing telemedicine apps. Even MIT was developing a microchip that was inserted into a woman that delivered a daily dose of levonorgestrel.

But unlike these, Natural Cycles is non-invasive and, most importantly, extremely accurate.

It’s easy to use, too. Before the woman gets out of bed in the morning, she will take her temperature which is an indirect measure of hormone levels. She’ll then input that data into the app. Over time as data accumulates, the algorithm “learns” and the app can measure when ovulation is happening and lets the user know if it’s a green day (fertility unlikely) or a red day (fertility likely). There is also an additional input for periods and LH levels that make the app more reliable.

Since husband-and-wife team, Dr. Raoul Scherwitzl and CERN physicist Dr. Elina Berglund, created this technology, over 150,000 women in 161 countries have used the mobile platform to help get pregnant and to know when protection is necessary. In fact, the inventive couple used Natural Cycles to conceive their first child.

Tüv Süd’s certification is an significant step for the company as the vetting process isn’t easy. According to Wired UK:

“To receive Tüv Süd’s approval, Natural Cycles had to open up every part of its operation, including the design of its app and algorithm, its customer support and internal company processes. It also had to submit the results of two clinical trials, the second of which analysed the data of more than 4,000 women aged 20-35.”

This certification means that it could be prescribed just like other methods of birth control in the EU.

In a speech during the tech entrepreneur-centric conference Slush in 2015, Scherwitzl also touted the app’s ability to monitor changes in progesterone. There are also monitoring features during pregnancy, including detecting a miscarriage indicator with the drop of progesterone in the first trimester, although this doesn’t appear as part of Tüv Süd’s certification.

While the While Natural Cycles is accurate, there are a few issues to consider before starting. The same results can be gleaned from manually tracking temperature and ovulation. The app isn’t free at $69.60/ year which includes a thermometer or $9.90/month without thermometer. And the studies the company cites were managed by Natural Cycles itself.

Even so, this may be an essential tool for women’s reproductive health across the globe. 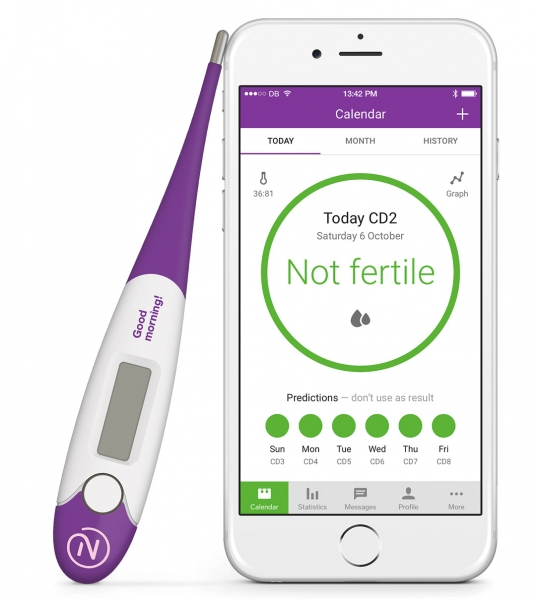