Over the past five years, wearable health technology has become ubiquitous. From Fitbits to the Apple Health app, there is a big market for consumers and medical professionals. Northwestern University recently announced a new piece of hardware that digs deeper than common activity trackers metrics by analyzing the components of the wearer’s sweat. The team, led by John A. Rogers, developed a thin, quarter-sized, one-time-use microfluidic patch that integrates directly with the skin and captures sweat.

We’ve written previously about larger, more cumbersome sweat-monitoring devices like a patch from UC San Diego that uses the lactate in sweat to create energy. And earlier this year, researchers from the University of California Berkeley, the Lawrence Berkeley National Laboratory, and Stanford developed a wristband that continuously monitors electrolytes.

The technology developed by Northwestern is different because you put it directly on the skin and it’s flexible. They tested the device on groups of long-distance cyclists, and they found as sweat is released from the body “microchannels” capture the fluid and perform accurate colorimetric analysis and examine biomarkers, like those from cystic fibrosis.

Yonggang Huang, who worked on this project and has developed skin-like tech with Rogers in the past, told Northwestern Now:

“We already know how to put electronics on the skin in a natural manner — here our challenge was dealing with fluid flow and the collection, storage and analysis of sweat in a thin, soft and flexible device…The sweat analysis platform we developed will allow people to monitor their health on the spot without the need for a blood sampling and with integrated electronics that do not require a battery but still enable wireless connection to a smartphone.” 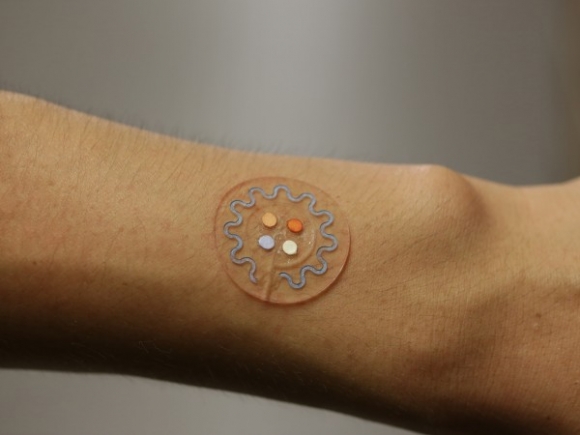