Surgeons in Florida are using Google Cardboard to help plan complex surgeries for infants with congenital heart disease, including in a recent life-saving surgery for an infant born with a particularly severe congenital heart defect.

Google Cardboard is a pretty simple device – place smartphone into a headset and strap it on your face. The software in Google Cardboard then allows user to view movies in 3D, play virtual reality video games, and explore 3d objects from every angle. Headsets like that are remarkably affordable, retailing for as little as $10 and up (not including the cost of the phone). While the array of interactive entertainment options available for such devices has increased exponentially, they aren’t only being used for fun – they are also being used to save lives.

Cardiothoracic physicians in Florida have been using Google Cardboard’s ability to visualize a virtual object in 3d for planning multiple surgical cases. This summer, they were able to repair an infant’s heart, that only had one lung and half of a heart, thanks in part to the pre-op planning allowed by Google Cardboard.

The surgical group at Nicklaus Children’s Hospital has pioneered the use of taking radiology images of the heart, turning them into 3d images, and printing them on a 3D printer to better visualize exactly what structures were involved prior to surgery. While no published research on such interventions is readily available yet, several studies have investigated the use of virtual reality for both physician education and pre-surgery planning.

This isn’t the only case of the simple, yet elegant Google Cardboard system being used for surgical planning. Back in January of this year, Dr. Redmond Burke, chief of cardiovascular surgery at Nicklaus Children’s Hospital in Florida, used virtual reality for another complicated heart surgery. The patient, also an infant born missing the left side of her heart as well as one lung, had previously been sent home on hospice. Her parents reached out to Dr. Burke for a second opinion after the baby girl continued to survive. He elected to proceed with surgery, and, along with Dr. Juan Muniz, initially planned to use a 3d visualization of the heart through a 3d printer. However, due to printer malfunctions, they instead took the 3d data of the heart, transformed it in the app Sketchfab into a format compatible with a virtual reality viewer, and loaded it into Google Cardboard. They were able to plan the unique surgery using the ability of Google Cardboard to view an object in 3D, and the operation was carried out successfully.

This certainly is not the last time we will hear of virtual reality technology being utilized in healthcare. The possibilities that virtual reality offers for healthcare are immense, and hopefully with the recent explosion in the array of devices available more exciting usage data will arise. 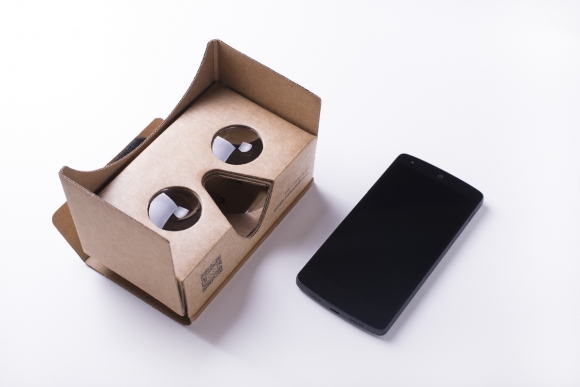 Vancouver, BC – July 7, 2016: editorial shot for virtual reality headset and a smartphone by Google, assembled from pre-cut cardboard and bi-convex lenses. isolated over a white background, horizontal