After Apple announced the iPhone 7, the internet was kinetic with excitement over the upcoming new features. We even reviewed the practicality of the latest device in the medical setting using gloves and how the new operating system could affect EMRs. With a water resistant body, new speakers, dual cameras, under-the-hood updates and the much-maligned removal of the headphone jack — there were significant updates with the iPhone 8. According to a new survey released by Doximity, doctors are adopting the iPhone 7 at relatively high rates.

Doximity states over 60% of all physicians in the U.S. are in their network. Based on their data, they estimate that 4.1% of physicians got the iPhone 7 in the first two weeks after release, whereas only 3.7% of the general population did in the same time period. 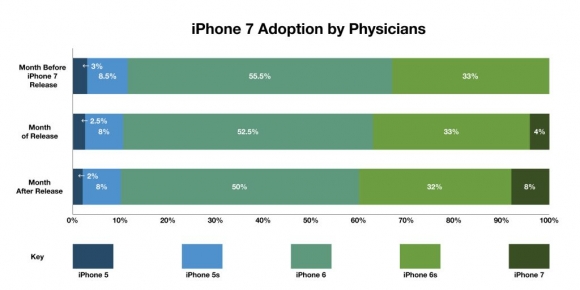 These findings don’t necessarily mean that the iPhone 7 will be popular with doctors going forward. Adoption of the iPhone 7 was significantly less than previous releases, and it appears that the iPhone 6, which is used by around 80% of physicians with Apple devices surveyed, has enough features to allow those doctors with one to sit this round out.

In past releases, the iPhone 5 and iPhone 6 have been adopted much quicker in the first month, at rates up to 37% in the month of the initial release.

From the results, we can also see that a large portion of iPhone 4 users upgraded their smartphone this time. There’s no way to tell if this was due to the fact that their older devices didn’t function properly or they were just excited by the prospects of the shiny, new device.