From candle-lit SoulCycle to the neighborhood YMCA, spin classes are a popular way to work up a sweat and burn calories.  A study published by the American Laryngological, Rhinological and Otological Society in The Laryngoscope titled “Cycling Exercise Classes May Be Bad for Your (Hearing) Health” by Sinha and colleagues confirms previous studies’ conclusions that exercising elevates the noise-induced temporary threshold shifts in the ear and puts class participants and instructors at risk for noise induced hearing loss (NIHL).

The crux of this particular study by the researchers was whether or not an iPhone app can be used to monitor for this concerning noise exposure. Researchers wanted to see if audiometry apps could allow for real time monitoring in a way to help facilitate hearing loss prevention.

Participants of the study were its non-blinded authors who randomly attended spin classes at different studios in the Boston area. Data on sound level and dosimetry was gathered using an iPhone 5, iPhone 6 and iPod Touch 6 with the SoundMeter Pro app. Calibration was set within 2-dBA accuracy of an external sound meter.

Those involved were instructed to attend spin class and find a spot in the middle of the room, if available. Then, they turned the microphones on their devices outward and began measuring noise levels once the music started or upon the first instructions. Tracking ended after the “cool down” period of the class. Music tempo and volume varied, and the participants’ distance from the speakers was not recorded.

The results of the study were consistent with prior studies that show these types of fitness classes can put participants and instructors at risk for noise induced hearing loss. However, this was the first study that utilized an audiometry app (not a separate microphone and device) — results from the usage of the Sound Meter Pro app showed it can be used for self monitoring of noise exposure.

Something the authors did not address in the study is the high cost of the Sound Meter Pro app — $99.99. Faber Acoustical does have cheaper versions of the audiometry app, a $19.99 version and a simple $0.99 version that just measures decibels. While the researchers touted the ability for consumers to now actively monitor for excess noise exposure for these apps, they did not give specific recommendations on how to use these audiometry apps in fitness classes or other settings. Further, it would have been great if they tried the cheaper versions of the app (e.g. the $0.99) to see if that was sufficient for consumer use.

Medical app featured in the study: 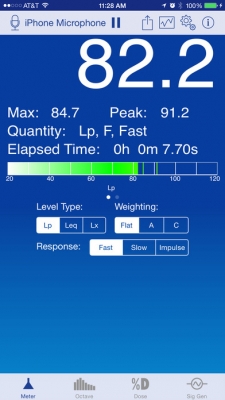 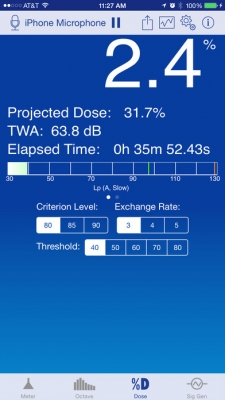