Mobile health has experienced dynamic growth during the past 2 years. All smartphone platforms now have a wide range of apps for management of medical conditions, fitness, and home health monitoring. As consumers become more comfortable with smartphones, their use of apps to manage health and fitness will increase. This is an update to a previous article where we analyzed search trends in Mobile Health using Google Trends.

Google Trends allows users to search its database for trends in search data. The data are scaled from 0 to 100 and plotted over a time scale to create a line graph, with 100 being the peak popularity for a particular search term. Users can compare up to five search terms and apply various filters to refine their search. While search trends might not directly reflect the popularity of apps, it does give a sense of search interest.

This change happened in conjunction with innovations in mobile health, and can be tied to the introduction of Google and Apple’s health APIs for their respective mobile platforms. Google Fit APIs were introduced during the 2014 Google I/O conference, and Apple introduced HealthKit during WWDC 2014. The spike in “health app” correlates with searches for apple and google’s APIs as seen below:

Now that specific products have been developed for these platforms, “health app” has trended back down to nearly the same level as the term “fitness app”. Health and fitness have been trending more than apps for specific medical conditions, and 2014 saw the largest growth for the field.

In comparison to health and fitness, searches for medical apps specific to common diseases were less frequent. Fitness and health apps had to be excluded in order to see a difference between apps for medical conditions. There are many reasons for this disparity. Compared to fitness, medical diagnoses like diabetes currently do not share the same appeal of posting significant milestones online. Social interactions within apps are a major reason for generating interest and participation, an appeal that most medical apps lack. Fitness applications are also marketable to a broader segment of the consumer market. Health and Fitness apps typically require minimal user input as activity data is tracked automatically from wearable tech and mobile devices. This is in comparison to most diabetes monitoring apps which still require manual input of blood glucose levels. These advantages over medical conditions could account for the increased popularity of health and fitness apps.

There is also a distinct separation of popularity between specific diagnoses. The general term “medical app” remains the most frequent search term. Searches for “Pregnancy app” were higher than other medical conditions such as diabetes, cholesterol, and blood pressure. This is despite the fact that there are more people with these chronic medical problems when compared to pregnancies. There are several factors that could explain this difference. The targeted demographics differ, with the majority of those in childbearing age now being millennials who have grown up with mobile technology. The diagnosis of pregnancy carries an intensive period afterwards where patients seek progressive education and guidance. It is intuitive that younger generations of consumers are more likely to utilize apps as a resource for knowledge and guidance in health. Pregnancy is unique in that it carries discrete stages of progression, while other conditions focus on maintaining goals. Apps for pregnancy also typically don’t require manual input of health data. The popularity of pregnancy apps on Google searches are due to the advantages they have over other chronic conditions.

Medical conditions have different rates of growth on Google Trends. Pregnancy apps show the highest growth rate, while cholesterol app searches remain flat. Blood pressure apps have seen a recent increase in the last two years as more compatible home blood pressure devices have been introduced to the consumer market. New devices and wearable tech that can utilize APIs to automate health data tracking could renew interest in chronic medical conditions. Searches for diabetes apps have seen minimal growth, but as new developments allows for wireless syncing of data from insulin pumps and CGMs, search trends may increase like blood pressure apps have. 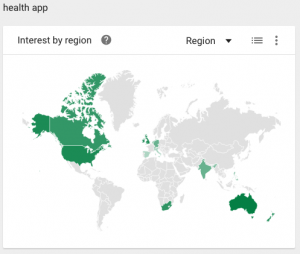 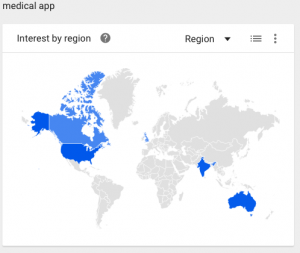 Google Trends has the ability to display patterns of search trends regionally. The United States remains the leading country in searches for medical apps while Australia leads in health and fitness.

Search patterns also correlate with cultural norms. There are yearly spikes in North American searches for “Health App” during January, where New Year resolutions abound. These patterns are not as evident in Australia, despite the country leading the world in searches for fitness. Australia also shares in the practice of New Years Resolutions, but Australians are known for having a high priority in their fitness culture, which may not be affected by New Year resolutions as with Americans.

US searches for fitness and medical apps

Consumers are showing increasing interest in using apps to manage their health and medical conditions. Google Trends is an interesting way to examine this interest through the use of their search engine. Some surprising findings were the popularity of pregnancy apps over more common medical conditions. This popularity can be attributed to millennials becoming the primary demographic for this product. It can be anticipated that as more millennials transition to an age range where chronic medical conditions are common, they will turn towards mobile health as a resource to learn and manage their new diagnoses.

Health and fitness apps saw spikes of searches in 2014 due to innovations from major smartphone developers. APIs have made it easier for developers to integrate the massive amount of data that wearables and mobile devices have been collecting. The differentiation between “health” and “fitness” apps may disappear as fitness data becomes integrated into overall health management. As evidenced in 2014, health apps will have a greater role in consumer use, especially as these platforms develop more ways to help impact health outcomes. Apple has recently partnered with the Mayo Clinic and Epic, which are potential ways to integrate health data with EHRs in a meaningful way for providers to make healthcare decisions for patients.

Regional differences may be evidence that marketing during the new year for fitness apps may hold more impact for North America but may be negligible in countries like Australia. Newer generations of users will look for apps to maintain their health and learn about how to manage new medical diagnoses. As mobile platforms find better ways to integrate social engagement, effectively use health data, and integrate with medical management, consumers and healthcare providers will have powerful tools to manage health.