This study was an extension of the researchers’ prior study where they scrutinized symptom checking apps and websites for diagnostic accuracy. In this study they compared those same symptoms checking digital tools with clinician accuracy.

Although there were no physical examinations conducted in the study and the co-authors admit that real-world scenarios can be dramatically different, the human physicians “vastly outperformed” their digital counterparts at a margin of 84.3% to 51.2%. Physicians were most accurate when it came to diagnosing high-acuity and uncommon vignettes. Symptom checkers were most accurate when diagnosis low-acuity and common vignettes.

While this study is definitely interesting it’s not comparing apples to apples at all and I had three concerns: 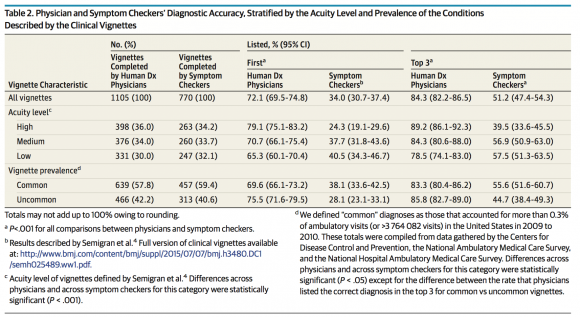