BMC Public Health recently published a study on the 4 most popular wrist-style wearable fitness devices: The Withing Pulse, Jawbone Up24, Fitbit Flex, and Misfit Shine. Seven people participated in the experiment and to gauge the satisfaction of each device, the researchers tested the following: features, functions, and measurement accuracy.

Testing the features of each fitness device included the device synchronization, UI App, hardware design, battery life, and ease of use. Adding the mean and standard deviation scores of the users, the Jawbone Up24 and Misfit Shine scored highest, 20.2 and 20.1 total scores respectively. The Withing Pulse scored 19.4, and the Fitbit scored lowest with a 14.8. 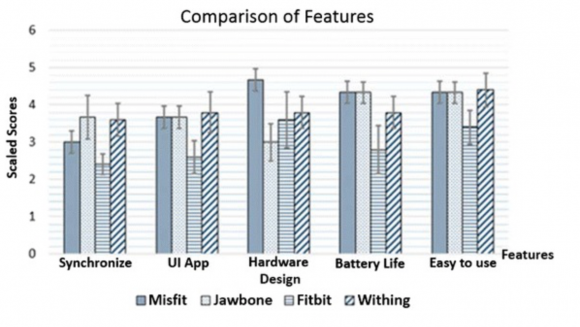 To test each device’s measurement accuracy, the users were to walk on the treadmill, walk up and down the stairs, walk on the court, and to repeat each exercise. After tallying the mean scores from each activity, the Withing Pulse blew the competition out of the water with a total score of 21. The Jawbone Up24 came in second with 16 points, the Fitbit Flex with 13, and the Misfit Shine coming in last with a paltry 10 points. According to the graph of the study, one could see how consistent the Withing Pulse’s tracking mechanism was for each activity. 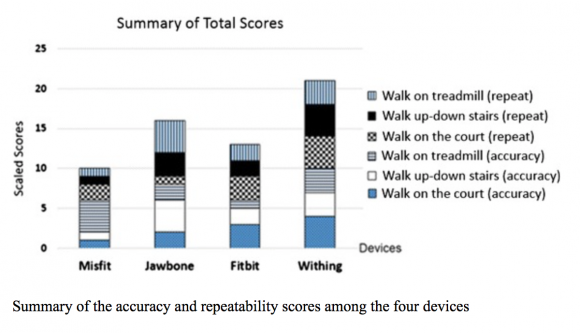 The results show the Withing Pulse coming out on top regarding user satisfaction wasn’t limited to the seven individuals in the experiment. The researchers also took a look at many online reviews posted by other users and found that their experiences matched those of the seven participants. The concluding consensus ranking the device from best to worst was Withing Pulse, Fitbit Flex, Jawbone Up24, and Misfit Shine.

Despite fitness device companies all claiming their technology to be the cream of the crop, this study provides evidence that certain wrist style wearable fitness devices outperformed others. The researchers found that the Withing Pulse device provided the most accuracy across multiple activities and had the best feedback from the seven participants in terms of user friendliness even though Jawbone Up24 and Misfit Shine had more features. These findings were further corroborated with thousands of user reviews posted online.