Review of ACLS Sim 2016 app, a case based method to learning code situations

Mobile games are big business for app developers. One look through the Apple or Android app stores will convince you of this fact. There are literally thousands of games available for download. The recent international success of Pokemon GO demonstrates the appetite for games on mobile devices. What about the use of serious games in medicine? Here on iMedicalApps we have reviewed a number of games for healthcare providers including Ward Round and various quiz games for board exam preparation. Games to practice critical procedural skills and resuscitation skills are less numerous. One of the most popular, the award-winning Resuscitation!, allows providers to practice ACLS skills and team management via a virtual simulator embedded in the app. Medical apps such as Ward Round and Resuscitation! use game-play features to entertain, motivate and sustain the attention of players. The goal is to make learning fun.

The latest entry into this increasingly crowded field of serious games is ACLS Sim 2016 from Anesoft. Founded in 1987 by a lawyer and an anesthesiologist, Anesoft has been making computer software for anesthesia simulation and code management for decades. The company also makes a number of apps that utilize the same technology as their computer software. Anesoft has published a number of studies showing positive outcomes from the use of their software in anesthesia, ACLS and PALS codes.

What patients/providers would benefit from this Medical App?

Students, residents, mid-levels, primary care, emergency medicine or any healthcare provider who is interested in a game to improve their resuscitation skills. 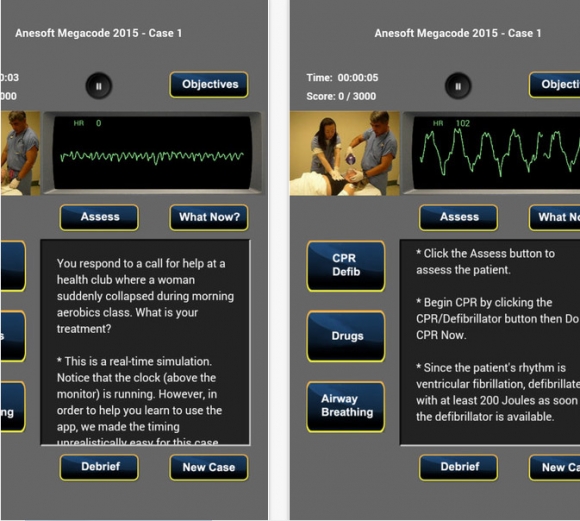 Review of ACLS Sim 2016 app, a case based method to learning code situations