Boston Children’s Hospital has released a medical app that allows hepatitis C patients to take part in a new ResearchKit study. The program, called C Tracker, collects information on patients’ health status through the Health app and uses short surveys to ask questions about their antiviral medication and how often they miss work because of hepatitis-related problems.

C Tracker is another addition to what has now become an extensive library of ResearchKit medical apps available for the iPhone.

C Tracker sends out occasional reminders to participants to encourage completion of their in-app surveys and sends out a reminder every 4 months to urge patients to fill out an overall survey. To participate in the study, one has to be at least 18 years of age, been diagnosed with hepatitis C, be a United States resident, and read and understand English.

To respect users’ privacy, the app developer does not collect personal information that would identify them as individuals by name or birth date. To conform with HIPAA regulations, the medical app only requires users to provide their birth year. Their name itself only appears within the application, not in the database. The researchers explain that “when you first use the app, a random number is created which will be used by us to know that the different information sent to us belongs to the same person.” However, Boston Children’s Hospital does plan to share the research information with others, assuming that the user signs a consent form giving it permission to do so.

C tracker is also capable of interfacing with a user’s smartphone or a wearable device’s sensors—including accelerometers, gyroscopes, and barometers–to collect activity type and level and the amount of time the participant spends in sedentary activity or sleeping. The medical app also has the ability to collect data about users’ real time location through a phone’s GPS, Wi-Fi or other capability. 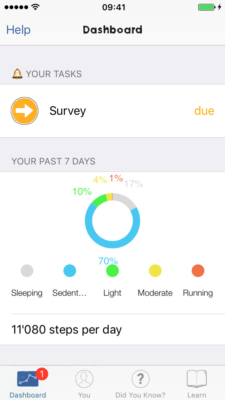 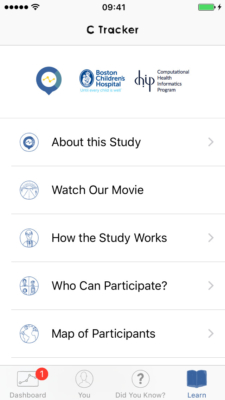