A lite version of the SmartQuit app is available from iTunes and Google Play while the full version requires a $49.99 subscription. It is also available through select employers, health plans, and state programs that have contracted with the vendor.

The Spanish version of the SmartQuit program has been partially funded by the Washington State Department of Health and the CDC Prevention and Public Health Fund. Citing a paper presented at the 2016 Society for Research on Nicotine & Tobacco 2016 Annual Meeting, the company says a Fred Hutchinson Cancer Research Center study found that “SmartQuit participants were about twice as likely to quit smoking as those who try to quit on their own. And, people who completed the core program saw quit rates of about 28% – which is significantly higher than the 4-5% of smokers who successfully quit on their own.”

Initially the SmartQuit app asks users to walk through an 8 day program to prepare for the cessation process. During those 8 days, smokers gain access to exercises that try to retrain the way they think about their cravings. It also provides customized messages, tips and tools as one progresses through the smoking cessation portion of the program. SmartQuit uses an Acceptance and Commitment (ACT) approach to quitting, details of which are outlined in a video presentation by Dr Jonathan Bricker on the 2Morrow web site. 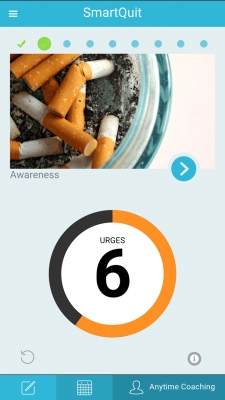 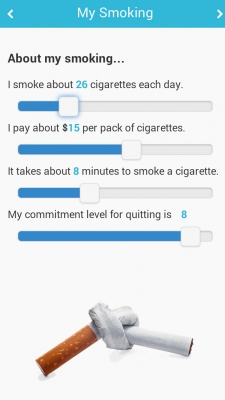