Lately every industry is being bombarded with news about how virtual reality can be utilized to change it. Corporations are pouring money into augmented and virtual reality technology because it provides an unprecedented perspective on the world that is as real as it gets.

The learning process is also being redefined, where people envision textbook lectures being replaced by students learning through an oculus headset. Medtronic Inc now wants to get into the virtual reality domain and have developed the MDT Aortic AR app to help provide an immersive experience for their stent.

Another medical device company was the first to use Google Cardboard for virtual surgery — Bard, with their Lutonix Drug Coated Balloon PTA Catheter.

For the medical app to be used correctly, you must have an oculus headset and virtual reality cardboards ready. After you install the medical app, you connect it to your oculus device and print out the trackers.

The trackers offer a multitude of information of EVAR (endovascular aneurysm repair) therapy, and combining it with augmented reality technology will provide a new dimension to your learning. Information in the Endurant II portfolio include, but are not limited to:

A precursor to using the virtual reality app is having an oculus headset / virtual cardboards because you will need to print out the trackers after connecting your headset with the app. With everything in place, you can now experience the Endurant II’s portfolio in an immersive and information-rich experience. 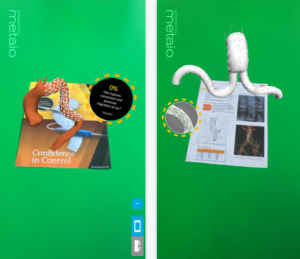