In a recent paper published by Matthew Major and Micah Alford in the Journal of Sports Science, the iPhone M7 process was tested for use as a pedometer. The M7 processor was used by Apple in their iPhone 5S and the subsequent M8 and M9 processors are based on the M7. The M7 was a big step for Apple as it was a first serious step towards fitness tracking being built into their actual phones.

Researchers used participants at Northwestern University and had them walk fixed distances: slow, customary, and fast. The iPhone was placed in participants hip pockets. The steps were recorded using a StepWatch device and also by video recordings in order to compare this data to the iPhone’s results.

For customary and fast speeds the iPhone M7 performed well in the study — however, with the slow speeds it did not. The slow speed measurements were prone to significant errors, as shown in this graph by the researchers: 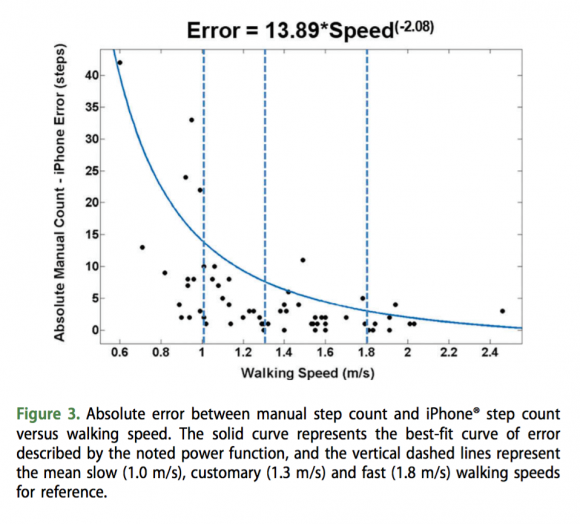 Overall this is concerning as patients with comorbidities often don’t have a fast walking pace and if the iPhone’s motion processor was utilized to track their activity levels it could be very inaccurate.  Further, many of the ResearchKit studies utilize the M7 processor to monitor the participants activity levels as a part of their studies.  The M8 and M9 (iPhone 6 and 6S) are subsequent motion co-processors and they have yet to be validated — hopefully their accuracy has been improved.  Currently no studies have been published that have validated these phones and their motion co-processors.