Last week we published how the Federal Government had launched a radiation exposure app, mFRAT for first responders. This week we wanted to take an in-depth look at the medical app with a full review.

The “Sum of All Fears” is a best-selling novel by author Tom Clancy which describes a terrorist plot to detonate a nuclear bomb during the Super Bowl in a major US city. Thankfully, it remains a work of fiction. Throughout the Nuclear Age, medical providers have been confronted with the arduous task of evaluating and treating radiation casualties. From the devastation of the atomic bombs dropped on Hiroshima and Nagasaki, to Three Mile Island, to Chernobyl and most recently the meltdown of the Fukushima nuclear power plant in Japan, providers’ skills in treating the devastating effects of radiation exposure have been put to the test. The US military has an entire institute devoted to furthering research in the field called the Armed Forces Radiobiology Research Institute (AFRRI) in Bethesda, MD. They recently converted their existing online Windows program into a mobile app for both iOS and Android devices.

Let’s walk through the medical app via a clinical case: you are working in the ER when a local nuclear power plant suffers a meltdown and you receive multiple radiation casualties including a patient presenting with nausea, vomiting, diarrhea and headache 2 hours after exposure along with a lymphocyte count of 2.5 x 109/L. What is this patient’s predicted outcome?

The radiation exposure medical app is based on the work of the Armed Forces Radiobiology Research Institute (AFRRI) located on the campus of the Uniformed Service University and the Walter Reed National Military Medical Center, Bethesda, MD. The medical app contains numerous references from the primary literature as well as expert recommendations from the AFRRI which has been in continuous operation since 1962.

What providers would benefit from this Medical App?

First responders, Emergency Medicine providers, military providers and any other provider who may encounter/treat radiation casualties. 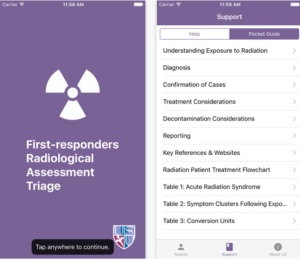