Ever since we started iMedicalApps, we’ve been finding health apps that make dubious claims and even put patients at risk. Going back to 2010, we came across several popular apps that claimed to treat acne using the flash on your phone; developers of those apps were later fined by the Federal Trade Commission. More recently, Dr. Husain identified a very popular blood pressure app – Instant Blood Pressure – that claimed to measure blood pressure using the smartphone camera & microphone. Instant Blood Pressure was later removed from the market and found to be inaccurate in a recent study as well. 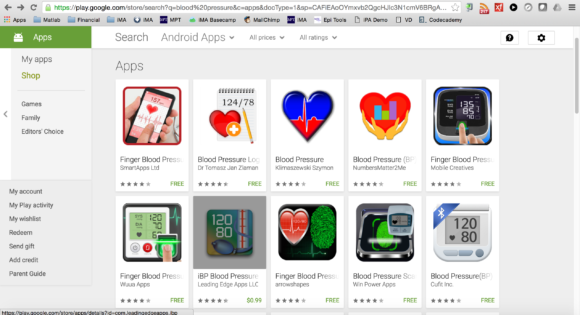 What’s more striking is how Finger Blood Pressure is the first result people see when searching for Android blood pressure apps in Google Play. It’s got a 4 out of 5 rating overall, based on 1,801 “user reviews.” Below is a sampling of some of the 5 star reviews, which should give you some sense of why I put user reviews in quotes. 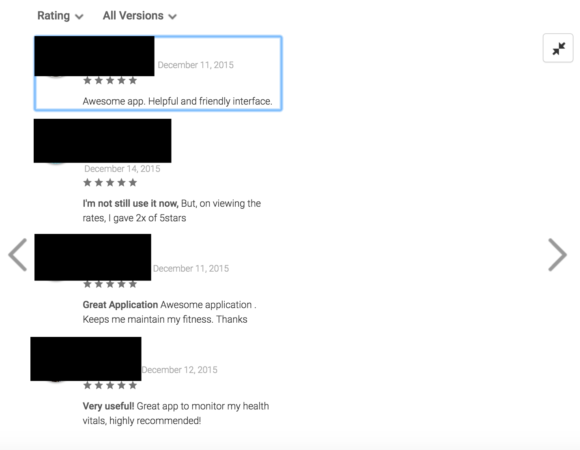 Most of the reviews that Google Play displays based on helpfulness call Finger Blood Pressure out as baseless, with several noting that it appears to be little more than a vehicle to display a ton of ads. 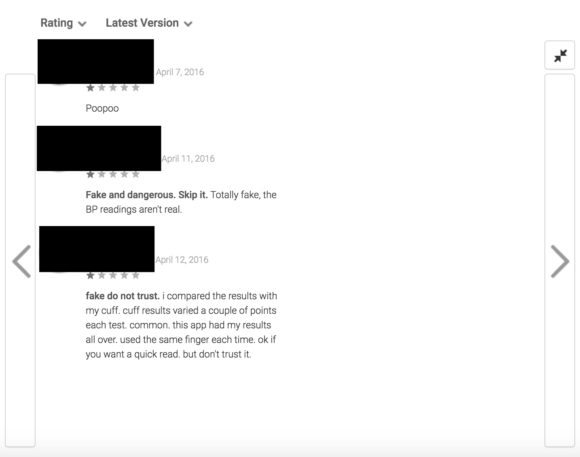 After a quick look at the other top results, I saw that many of the listed apps had similar titles and had the word “prank” in them. In fact, among the top 50 results, 30 apps were “prank” apps that were generally pretty clear they display a fake blood pressure when the user puts a finger on the screen.

My guess is that this represents a few opportunistic developers who have flooded the marketplace with these Android blood pressure apps to generate some advertising revenue through in-app ads. And while my idea of fun is slightly different than those 30 “prank” blood pressure apps, they at least are pretty clear that these are fake measurements.

I am concerned about the two apps that actually claim to measure blood pressure, particularly given how high they show up in the search results for blood pressure. While I hope most people would immediately dismiss those claims and move on, the plethora of 1 star reviews shows that a lot of people were at least intrigued enough to take a look. And what if not everyone saw through these apps’ claims?

While there certainly appears to be grounds here for action by agencies like the Federal Trade Commission based on deceptive marketing, it also highlights the need for improved curation of health apps. While there is some value in the openness of the Android world, this is clearly a weakness. And as clinicians, if we want our patients to use health apps as self-management tools, just telling them to go find an app is clearly not going to be enough.