A few years ago I mentioned how I was surprised Pebble wasn’t focusing more on health. For several years Pebble was relying extensively on developers to create health tracking features and did not have core health features built into their watches.

This month they finally announced a collection of health centric devices and are focusing on their Pebble Health platform. Their fitness based watches differentiate from Apple Watch in a few key ways. 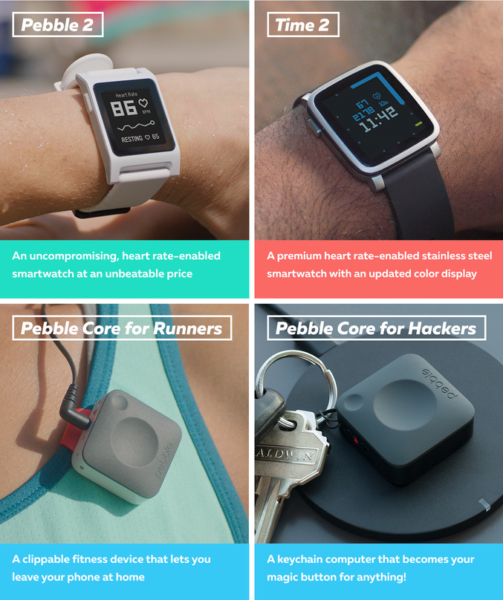 Pebble 2 is their cheapest fitness focused watch. The smartwatch features continuous heart rate tracking and motion tracking. Features that distinguish Pebble 2 from Apple Watch are the ability to swim with the watch (better waterproofing) and battery life lasting more than a week. Cost of the Pebble 2 is $129 (retail).

The Time 2 has all the features the Pebble 2 has but is in more of a premium finish. It costs $169 (retail).

Pebble also announced Pebble Core. An interesting clip on device that has no display, and has a 3G modem and GPS built into it that allows you to meticulously track your runs without needing to carry your phone.

Pebble is trying to legitimately be both — a smartwatch with a robust UI that is just as capable at Fitness and Health. It’s unfortunate it took Pebble this long to become serious about health features in their smartwatches.