In February 2016, the Third International Consensus on Sepsis published “Sepsis 3.0”, the first new sepsis guidelines since 2003. Sepsis remains the 9th leading cause of disease-related death and the primary cause of infection-related death in the ICU. The new guidelines were welcomed by many since the long interval of time since “Sepsis 2.0”, but have already created a firestorm of controversy especially in emergency medicine. Much of this controversy is due to the move away from the systemic inflammatory response syndrome (SIRS) criteria in favor of the sequential organ failure assessment score (SOFA) and qSOFA scores. I encourage everyone to read the three excellent articles published by the “Sepsis 3.0” consensus group in the Journal of the American Medical Association (JAMA).

My previous “go to” sepsis app has been ESCAVO Sepsis. This is, and remains, a stellar medical app for sepsis and has also been revamped to include the new sepsis guidelines and other recent publications about the treatment of sepsis such as the PROCESS and ARISE trials. Previously here on iMedicalApps we favorably reviewed the ESCAVO Sepsis app. The latest medical app to take up the new sepsis guidelines comes from three internal medicine residents at Englewood Hospital in New Jersey — called SmartIntern: Sepsis 2016.

You may recall I previously favorably reviewed their other excellent medical app called Heart Evidence, which summarized key trials in cardiovascular medicine. They publish their medical apps under the company, SynapticMedicine.

SmartIntern Sepsis takes the new sepsis guidelines and creates a user friendly sepsis diagnosis algorithm that incorporates qSOFA and SOFA. Both calculators are built right into the sepsis app. Furthermore, the SmartIntern: Sepsis 2016 app provides commentary and excerpts of the guidelines throughout the step by step process and “changes” the output in real time based on the input you give the app about the patient you are evaluating.

Login to iMedicalApps in order to view the following video review of SmartIntern Sepsis 2016. Registration for iMedicalApps is free.

SmartIntern Sepsis 2016 provides a point of care synopsis of the new Sepsis 3.0 guidelines. In my opinion, it improves upon the published articles by operationalizing the guideline into a step by step algorithm for evaluating patients at the point of care. The app contains numerous references and links to sepsis websites such as the Surviving Sepsis Campaign and the journal PDF’s published in Feb 2016 in JAMA.

Who would benefit from this App?

Students, nurses, residents, mid-levels, faculty in any specialty who care for patients with sepsis. 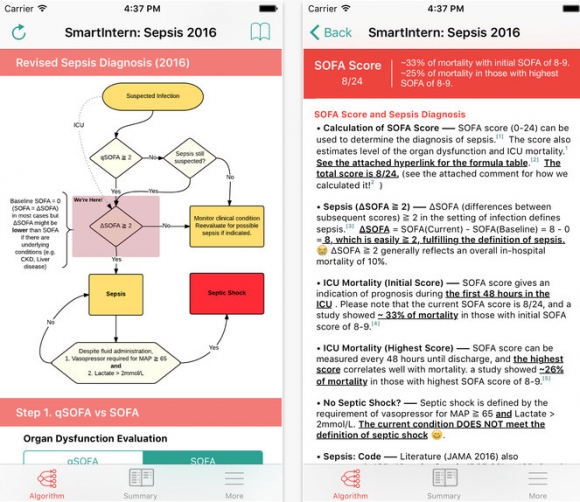