There are several Oncology centric medical apps in the Apple and Google Play stores. The University of Florida Cancer Center recently released a clinical trial medical app for patients and physicians while Polaris and MD Anderson Cancer Center have teamed up with Apple for an Apple Watch pilot study on breast cancer. Even the IBM super computer Watson is being used by cancer centers to help improve cancer treatments.

The Children’s Eye Cancer Foundation Germany KAAKS seeks to build a communication bridge for Retinoblastoma (RB) patients and survivors worldwide with the release of its free medical app RB-World. Retinoblastoma refers to cancer that starts in the retina, which is the very back part of the eye. It generally affects young children but does rarely occur in adults. Though it is a rare form of cancer, it is the most common form of cancer affecting the eye in children, and it can occur in one or both eyes. The Children’s Eye Cancer Foundation is focused on early detection methods, providing comprehensive help, state of the art research and unwavering support to improve the lives of children who have been diagnosed with RB. With the release of the RB World App, they seek to give RB patients and survivors a place where they can meet others who are battling this illness.

The RB World app is for RB patients or survivors who are 12 or older and the medical app can be downloaded on any smartphone or tablet. RB World is a platform where users can find people nearby who suffer from RB, tell their story or form support groups. Users can only signup by invitation and all communication, and medical information is encrypted ensuring that all conversations are private. Users fill out a detailed profile using a username of their choice. First and last names are not saved, and the user’s email is never displayed ensuring that any and all communication occurs within the chat area. Users can search for other patients and survivors to connect to locally or worldwide. The great thing about this oncology app is that all users either are currently RB patients or survivors, so they understand the illness and its impact.

The RB World medical app exposes a part of cancer treatment that is often not discussed during a clinic visit, such as psychological and emotional support. For some, group therapy can be a way to interact with others who understand their fears and their struggles. These men and women of all different ages and backgrounds have a chance to connect with others who have walked in their shoes. The Children’s Eye Cancer Foundation Germany focuses on connecting these individuals which each other so that they can see that there are others who are going through the exact same thing and it is possible to live a happy and healthy life with cancer.

Research studies have shown that support groups can be a positive reinforcement. A team of researchers at Stanford University School of Medicine led by Dr. Spiegel studies the lives of several women with metastatic breast cancer who were participating in support groups. Their results showed that support groups seemed to improve the quality of life for patients and seemed to have a positive effect on mood and pain. Spiegel has conducted several different support group research projects finding that support groups can not only help patients better cope but can also improve mood, reduce pain, depression and even anxiety for cancer patients. The RB World app allows users to find a support system from the comfort of their home. They have an open forum to express exactly how they feel and can see how others cope with similar problems. Survivors also have a chance to show how they beat the illness and that there is light at the end of the tunnel.

Medical apps have become an effective way to connect people together within the healthcare field, and it’s not limited to cancer. There are several studies going on related to sickle cell disease. Children’s National launched a sickle cell pain medical app to help monitor patients after they have been discharged from the hospital. While the Children’s Hospital in Los Angeles has also launched its own sickle cell study app. The RB World app focuses on a different form of medical treatment and brings to the forefront the importance of interacting and communicating with our peers. 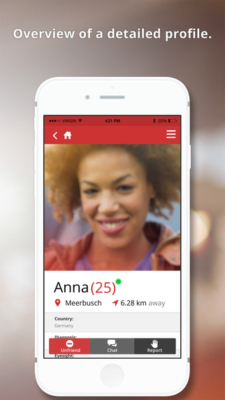 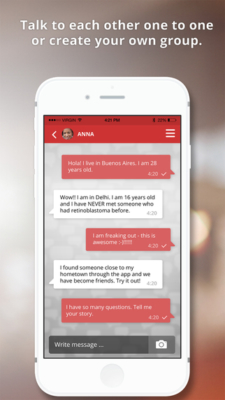