According to the CDC, 1 in 3 adults in the United States will have diabetes by 2050. The disease creates a significant burden on morbidity and mortality as well as health care system costs. In 2012, diabetes directly caused 1.5 million deaths per the WHO at a cost of $245 billion per the ADA in the US alone.

For providers looking for mobile apps for the treatment of diabetes, we still recommend any of the first line of general medical reference apps we have reviewed, such as Dynamed/Dynamed Plus, UpToDate, Essential Evidence and/or Medscape. However, for quick access to current Type 2 diabetes treatment recommendations additional options include ADA Standards of Medical Care and the recently reviewed AACE 2016 Diabetes Algorithm. It must be noted that the ADA app has not been updated since the release of the 2014 standards. The 2016 ADA standards can be found here. Both the ADA and AACE apps touch on insulin dosing, but both could be improved in that area. The Endocrine Society has recently updated their excellent website and app called Accurate Insulin Decisions. The Accurate Insulin Decisions app is designed for primary care providers who are increasingly bearing the burden of prescribing insulin regimens for Type 2 diabetics who are unable to be controlled with lifestyle modification and oral medications. With a national shortage of endocrinologists, primary care providers must become more comfortable with prescribing insulin for their patients. The medical app was developed by two endocrinologists, Neil Skolnik, MD and Christopher Notte, MD. The diabetes app was partially funded by grants from Lilly and Novo Nordisk, makers of various insulin products.  Accurate Insulin Decisions contains abundant information on who should be started on insulin, the differences between the various insulin preparations, and proper dosing and adjusting of insulin regimens.

Login to iMedicalApps in order to view the following video review of AACE 2016 Diabetes Algorithm. Registration for iMedicalApps is free.

The Accurate Insulin Decisions medical app delivers evidence based and expert/consensus based regarding proper insulin prescribing and dosing in patients with Type 2 diabetes. The diabetes app is well referenced and provides content any medical student up to seasoned attending could benefit from having available at the tips of their fingers.  Accurate Insulin Decisions is focused solely on insulin dosing. See the AACE diabetes app or the ADA standards of care app for additional information on the comprehensive care of patients with diabetes. The fact that the app is partially funded by a drug company cannot be overstated.

Who would benefit from the Accurate Insulin Decisions app? 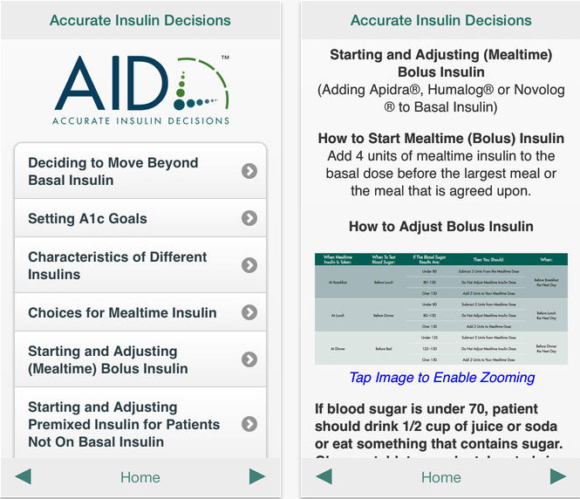