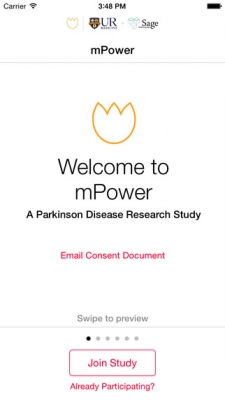 Sage Bionetworks, an independent medical research institution, has announced plans to make the data from its mPower ResearchKit study of Parkinson’s disease available to medical researchers around the world.

mPower was one of the first ResearchKit studies, launched in March 2015 when ResearchKit was released. Its aim is to collect data on patients with Parkinson’s disease to better understand factors related to progression and response to therapy.

The announcement that Sage would make this dataset open for medical researchers to analyze coincided with several major announcements related to the Precision Medicine Initiative. To get access to the data, researchers will be verified, have to pass an ethics exam, and take an “oath of practice” which is presumably a commitment to use the data appropriately.

Patients will be presented with studies with which they can share their data, including options to pick what data is actually shared. Informed consent processes will also be built in to the workflow for these studies.

This announcement is at the leading edge of a trend to make these large datasets available in some form for analysis by the broader medical research community. At the very least, this kind of access can help introduce new perspectives and ideas when it comes to analyzing the available data.

It could also open interesting opportunities for data linkage to further enrich the dataset. For example, if identifiable information is included, one could reach out to patients within a region where health exchange that includes research uses is available. Or researchers with particular expertise that the primary team, in this case Sage, doesn’t have, could do things like facilitate linkage to claims data or the social security death index.