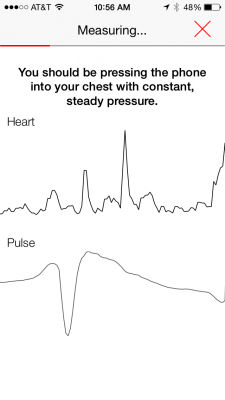 A study presented today at the American Heart Association EPI & Lifestyle (AHA EPI) meeting in Phoenix has shown the shocking inaccuracy of a popular medical app, Instant Blood Pressure, that we raised concerns about nearly two years ago.

Back in 2014, we raised concerns about the Instant Blood Pressure medical app which claimed to measure blood pressure just by having users put their finger over their smartphone’s camera and microphone over their heart presumably to use something akin to a pulse wave velocity (more on that later).

Despite the fact that this claim seems so obviously dubious, the app was incredibly popular and spent months as a top 5 app. Inexplicably, the app made it through screening by both Google & Apple and wasn’t removed for more than a year after our first article.

Despite including the usual fine print disclaimer, this medical app was marketed as a way to measure blood pressure and a number of comments in the app reviews described how people were using this app for management of their health, even with one medic saying they were confident using this app as well. 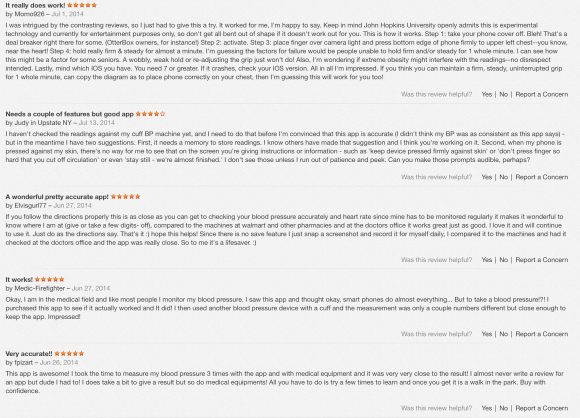 Dr. Timothy Plante, a fellow in general internal medicine at Johns Hopkins, led the study in which a total of 85 participants were recruited to test the accuracy of the Instant Blood Pressure app. Participants had their blood pressure measured by both the app and a validated, standard blood pressure monitor.

These results, while striking, should not be surprising. This medical app had no publicly available validation data, despite reassurance from the developer back in 2014 that such data was forthcoming. The use of things like pulse wave velocity as surrogates for blood pressure has been tried and is fraught with problems, and it’s not surprising that a medical app that has no publicly available testing data and hides its algorithm as “proprietary” would be inaccurate. 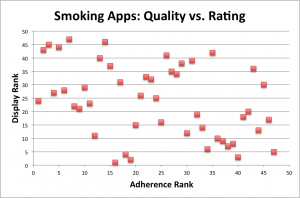 It’s also not surprising either that the user ratings were so discordant with the actual quality of the app. That’s been well demonstrated in studies looking at apps for hypertension, smoking cessation, and other health conditions. The graph here shows the correlation between app rank and quality rating for a smoking cessation app study by Abroms et al. While you’d expect apps with a better ranking to have a higher quality rating, you can see that there’s virtually no relationship.

The Instant Blood Pressure app story highlights the risks embedded in the digital health market, where there is a low barrier to entry and limited oversight. Instant Blood Pressure was sold for between $2-5 during its time in the market and downloaded hundreds of thousands of times before it was pulled from the market. That suggests the developers made big bucks off an app that was unvalidated and inaccurate.

While the FDA has taken a largely hands off approach, the FTC has been quite aggressive and I suspect Instant Blood Pressure would have caught their attention (and may still). But it would be implausible to rely on the FTC to screen all 165,000 health apps on the market that make specific health or medical claims. At iMedicalApps, we do our best to review as many medical apps as we can and call out apps like Instant Blood Pressure.

But at the end of the day, it will fall to the consumer, clinician or patient, to make their own assessments of a health app. It’s critical then that we educate clinicians and patients about the questions they need to ask before using a medical app.

Ed. Note: This article was updated to clarify that app users needed to place both their finger over the camera and microphone over their chest. Additionally, Aura Life has now published some internal testing data on its website apparently in response to this study.