EarlySense is a company that hopes to detect patient deterioration early and helps improve clinicians’ response to adverse events before they become life-threatening. Emphasizing the fact that many critical events are preceded by early warning signs up to 8 hours before the event occurs, the company makes a contact-free sensor pad that can be inserted under a patient’s mattress, allowing care givers to track heart rate and respirations, as well as the patient’s motion. Changes in patient status are sent to a central dashboard at the nurses’ station, to larger computer screens elsewhere in the facility, and to mobile devices. The monitoring system is designed specifically for non-ICU, general med/surg patients who are typically monitored once every 4-6 hours by the nursing staff.

The designers were also aware of one of the major shortcomings of inpatient monitoring systems, namely alert fatigue. With the EarlySense system, alarms typically sound between 2 and 3 times per 100 hours with 1.2 false alarms in that same time frame. By contrast, the telemetry and oximetry used in typical acute care settings generate 200 alarms per 100 hours, 118 of which are false, according to statistics provided by EarlySense.

Since the EarlySense sensor pad also detects motion, it is capable of monitoring patients at risk of falling when getting out of bed. The technology “instantly alerts the care giver before the patient is out of bed” according to the company web site. The technology offers six levels of bed sensor sensitivity, allowing clinicians to adjust the settings to the specific needs of each patient, depending on their risk level.

We’ve written about several geriatric apps before on iMedicalApps — many have them have focused on preventing falls, such as the SafeWander wearable. The EarlySense sensor pad is interesting in the ability to monitor heart rate and respirations, and claims it has potential to be used to detect pathology such as sepsis, aspiration, and a variety of other conditions. I’m extremely skeptical about many of these uses — mainly because the EarlySense company’s own internal research study didn’t show statistical significance for many of the uses they claim.  One of their own internal studies didn’t even show a statistical significance when it came to preventing falls — it did show statistical significance when it came to preventing pressure ulcers.

Clearly EarlySense is chasing as many “hot button” hospital pathologies as possible — mainly sepsis and pressure ulcers.  From a marketing standpoint that makes sense.  But studies like the ProCESS trial have shown sepsis is nuanced and complex, while attempting to diagnose / predict a pulmonary embolism in the elderly (one of their claims) can be one of the hardest things to do when you consider age adjusted dimer rules and all the various reasons the elderly can have elevated respiratory rates (pneumonia, CHF exacerbation, COPD exacerbation, etc).

EarlySense points to a lot of medical studies (not on their product) to justify why “early detection” matters, but early detection can also mean unnecessary visits to the emergency room or unnecessary tests. If I have a patient the EarlySense pad determined was apneic or hypoxic for 20 seconds, but now looks fantastic in the ER and has a normal physical exam, do they get full labs, chest x-ray, ECG, and other testing? Maybe the sensor picked up a wrong reading? In general I remain skeptical about many of these “early sensing” wearables and technology until they are utilized in legitimate clinical trials to show they actually work.

I applaud EarlySense for at least having a white paper study (it was not published in a peer review journal), that’s better than 90% of the wearable technology out there.  They also have various poster presentations as well.  Almost all wearable companies and digital medicine companies don’t bother with silly stuff like health “research” (ha).  There certainly might be a place in medicine for the EarlySense pad, but figuring out where will probably be the hardest part. 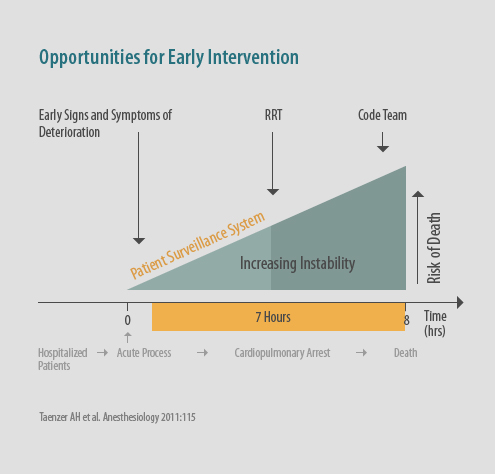