Smartphone-enabled medication reminders are not new, but DoseSmart makes an interesting system that facilitates patient compliance. The medical app lets patients enter a drug’s name, the dosage to be taken, as well as set up notification reminders and a weekly schedule. Users can then link the reminder system to a smart DoseSmart pill bottle that will dispense the drug on schedule.

The company points out that the smartphone reminder system still works without the pill dispenser but it’s the dispenser that makes the reminder system unique. The vendor says “DoseSmart connects wirelessly to your iPhone, and syncs with the DoseSmart companion app to record each time that you take your medication.” The pill bottle glows and chimes when it’s time to take a pill, and the smart pill bottles are also available for clinical trials, according to the company.

There’s little doubt that medication reminders can have a significant impact on patient care and the cost of care. These smart pill bottles are obviously not new, we’ve covered various iterations of them prior on iMedicalApps.com.

DoseSmart estimates that prescription non-compliance costs about $300 billion a year in the United States. It’s also estimated that about half of all patients don’t take their medication as directed. Unfortunately the DoseSmart offers no published studies to indicate its medical app and dispenser will lower that figure. 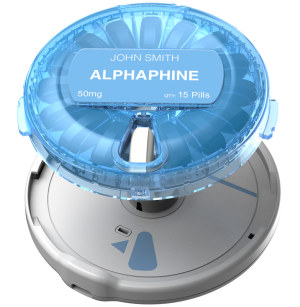