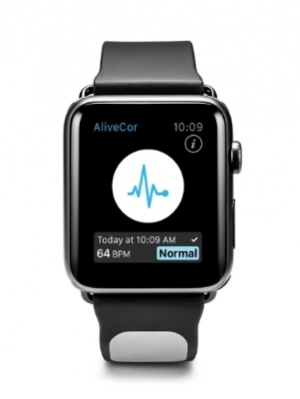 AliveCor is best known for its smartphone EKG device, the AliveCor Heart Monitor which they’ve now rebranded Kardia Mobile. That device uses a small smartphone attachment with two embedded electrodes to let users capture a single lead EKG by just touching both of the electrodes with their hands or to their chest. Perhaps the most interesting feature of that device is how the data is transmitted to the smartphone – using an inaudible ultrasonic signal that’s picked up by the smartphone’s microphone and converted back to an EKG signal.

The Apple Watch EKG, the Kardia Band, is basically a band for the Apple Watch that has an embedded electrode. Users just touch their thumb to that electrode and can capture a single lead EKG. They are then told whether the recording was normal or not. It can also tell users whether atrial fibrillation was detected. Both of those functions are based on previously validated and FDA cleared algorithms, also included in Kardia Mobile.

As with Kardia Mobile, the Kardia Band will be particularly useful for patients who have paroxysmal arrhythmias, or heart rhythm problems that come and go, who have an Apple Watch. It could also have interesting applications for research, letting users capture frequent EKG tracings along with activity data, continuous heart rate data, and other metrics already captured by the Watch. AliveCor also recently announced integration with HealthKit, which could help integrate these devices into ResearchKit based studies.

There’s been some promising data in using the Kardia Mobile for atrial fibrillation screening. A large study in Australia using the Kardia Mobile device for opportunistic, one-time screening of elderly patients in community pharmacies showed a detection rate of around 2% for AF in elderly patients picking up medications at their pharmacy. I’d anticipate that higher frequency screening of the same population would likely push that number higher and several studies are launching testing that hypothesis using patch-based single lead EKG monitors. It’s not hard to imagine how an Apple Watch EKG could be integrated into a screening program where users capture many tracings through the day and perhaps even achieving similar sensitivity to a continuous patch-based monitor.

What is more interesting though is where AliveCor takes things from here. When I spoke to AliveCor founder and CMO Dr. Albert last fall, it was clear that his vision was to make these devices as accessible as possible. He was particularly proud of the fact that the Kardia Mobile had dropped in price by more than 50% within two years of release and redesigned to basically work with any smartphone. I’d guess the same vision will follow here with Kardia Band and that over time we’ll see it become available for a broader range of smart watches, including low cost devices, and at a lower price point.

The device is currently undergoing FDA review and is anticipated to be approved & released later this spring.