Intraocular lenses (IOLs) are commonly implanted into patients during cataract surgeries after removal of the cloudy lens and refractive surgeries. Although the goal of these surgeries is to restore general vision, there is a high risk of getting a different type of visual defect, called dysphotopsia. Patients often describe this condition as seeing glare or halos in their line of vision, which again decreases their vision quality. In fact, this is one of the performance measures for night driving, but there is currently no standardized or reliable instrument to measure the extent of dysphotopsia. Existing halometers (the instruments that measure retinal halos) such as the C-Quant straylight meter tend to measure only the forward light scatter, which is not very useful for detecting glares produced by IOLs. 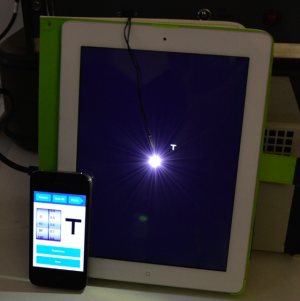 Buckhurst et al. designed and tested the Aston halometer, which consisted of a bright light source emitting to the center of an iPad 4, and an iPhone remote control connected via Bluetooth. Twenty young subjects with perfect or corrected vision using contact lenses were recruited. They were positioned 2 meters from the iPad screen in a dark room with only the light from the halometer. After 1 minute of adjusting to the dark room, subjects were presented with a series of letters in 8 different orientations, each separated by 45 degrees, that randomly moved in a centrifugal manner at 0.05 degree intervals around the light source on the iPad at 4 different luminescence levels. This was intended to cover all directions of gaze that a real patient would experience. Each letter was randomly presented at the same spot 3 times.

To simulate glare, Bangerter occlusion foils containing micro-bubbles that controlled the spread of light were placed in front of one eye while the other was completely occluded. Two different levels of light spread were tested and compared with the results when no occlusion foil was used. If the subject noted that the letter was obscured 2 out of 3 times in one orientation, it was recorded. Each subject repeated this procedure two times with different investigators conducting the test.

The results for each subject were averaged, and compared to those of other subjects using 1-way ANOVA. The glare area was calculated using the locations and orientations where subjects noted obscured letters. They found that there was a significant difference in the halo size observed using the two different occlusion filters.

This was one of the few studies that used a repeatable methodology to quantify glare in different directions of gaze. A remaining challenge faced with this setup is that the glare area can exceed that of the iPad when low luminescence and high glare situations were presented. As suggested by the authors, with adjustments to the testing distance or the screen size, this problem could be eliminated.

This study demonstrated that common mobile devices such as the iPad and iPhone could be fashioned into a reliable tool for assessing dysphotopsia with clear advantages against previous halometer designs. Mobile devices have been used for other optical applications, such as slitlamp exams and even for providing mobile eye prescriptions (Opternative).