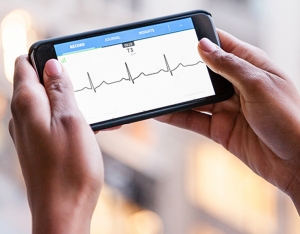 Postoperative atrial fibrillation is a common issue after surgery, particularly heart surgery, and often resolves during that same hospitalization. The big question, then, is what to do about it in the long term. Short-term recurrence factors heavily into that decision.

In this study, patients with a single episode of AF after heart surgery were given an AliveCor device and asked to check a single-lead ECG four times per day as well as if they had symptoms. They did that for a month.

Among the 42 participants, ten patients had a recurrence detected and all were within the first three weeks of follow up. In four of those patients, the recurrence was asymptomatic.

In terms of follow up, six of the patients with a recurrence had a subsequent 12-lead ECG and/or Holter monitor that did not show atrial fibrillation. It does not appear any further action was taken, though it’s debatable whether those follow up tests should be sufficiently reassuring that a patient doesn’t have paroxysmal AF. The other patients were managed for recurrent AF, with two ultimately ending up on an oral anticoagulant.

Compliance with what may on first pass seem like a demanding tracking regimen, was impressive. Participants sent in ECGs for an average of 29 days, with a mean of about 3 ECGs per day.

One of our critiques in our review of the AliveCor Heart Monitor was the inherent limitations in using a spot ECG to diagnose a paroxysmal arrhythmia, specifically when that arrhythmia is asymptomatic. The key is finding the frequency of spot checks to achieve an acceptable sensitivity in the population being screened. Another study using the AliveCor Heart Monitor for one-time screening of older adults in pharmacies found silent AF in 2.5% among those screened.

For higher risk patients, more intensive monitoring may be needed. This study offers some insight in that four checks did detect a meaningful number of asymptomatic AF cases in a small group of high risk patients. There are also studies underway testing whether continuous ECG monitoring using the Zio patch can help identify silent AF in high risk patients.

It would be really interesting to compare the number of arrhythmias detected by varying frequencies of spot ECG checks to those detected by simultaneous continuous ECG monitoring. Not only could the AliveCor Heart Monitor or similar peripherals be used for for this spot screening, there’s also promising work on developing an app that can identify AF simply using a smartphone camera & flashlight.