Since Apple’s announcement of HealthKit and ResearchKit, developers and researchers have been busy trying to get a piece of this exploding market. Between fitness trackers and their own dedicated apps and the ever expanding pool of disease specific apps, patients have never before had so many ways to take charge of their health. Furthermore, many of these apps have the ability to send data to providers via popular EMR’s including Epic.

Here at iMedical apps we have discussed a number of the initial ResearchKit apps. One of the first and most popular ResearchKit apps came from LifeMap, a CA start-up. Their first ResearchKit app, Asthma Health was designed in collaboration with providers at the Icahn School of Medicine at Mount Sinai. That ResearchKit app enrolled over 8,400 patients as of September 2015 and provided tight integration with the Apple HealthKit app and included EHR integration. In December 2015, they launched their latest patient health app called COPD Navigator.

COPD Navigator continues the collaboration with the Icahn School of Medicine and permits COPD patients to view air quality, track their steps, heart rate, pulse ox, peak flow, medications, exacerbations and their daily symptoms. The more they participate with the medical app, the more “Health Points” they earn — adding some gamification of medical apps to the mix. The app also contains a detailed patient education section that is surprisingly free of Big Pharma bias. This version does not tie in with EMR’s but a sister version, iBreath, will send data to Epic and other EMRs. Plans reportedly include integration with smart inhalers for better medication tracking.

Who would benefit from this Health App?

Patients with COPD and the healthcare team of providers who takes care of them. 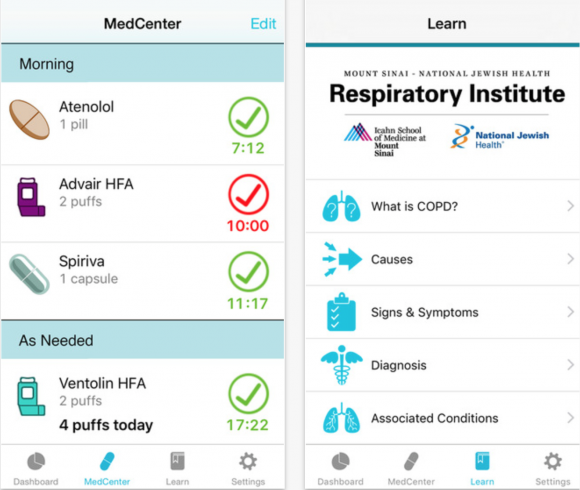