A few groups have looked into mobile diagnosis of acute appendicitis before using the Osirix app, but the evidence was not too convincing.  Several years ago one of our surgery editors showed how he utilized OsiriX and Dropbox in the operating room.  With the support and licensing of various medical apps from governments such as the US, UK, and Canada, continued research in the area of remote diagnostics is still underway.

In a recent Korean study by Kim et al, the feasibility of using an iPhone 5S on a 3G connection as a remote device for conducting real-time CT interpretations was tested. The iPhones were connected to the hospital’s central picture archiving and communication system (PACS) workstation where 120 CT scans were preselected for this feasibility test. Sixteen skilled CT experts were divided into two groups and were asked to analyze half the scans with the iPhone remotely, and the other half with the LCD monitor at the PACS station in the hospital.

The results showed that the accuracy, sensitivity, and specificity of the interpretations made with the iPhone were as high as those using the LCD monitor. However, the average time for one interpretation to be completed on the iPhone was about 17 minutes longer than at the PACS station, which is a significant time difference for emergency situations. Although the reasons for the delay are unclear, the initial unfamiliarity with operating on the iPhone might be a contributing factor.

This study was done on a 5.32 Mbps 3G network, which is higher than the average 4 Mbps in 35 countries across the world, therefore more testing will be needed to see whether the iPhone platform will produce the same, real-time results in these countries. Other studies have also commented on the speed of the connection as the limiting factor for remote emergency diagnostics using mobile devices.

The surrounding lighting and the illumination of the iPhone is comparable to that of the LCD monitor at the PACS station, which eliminates the potential issue of missing less obvious CT scan details compared to current methods. Diagnosis of other types of appendicitis using this remote CT platform also needs to be tested, as this study focused only on acute appendicitis. 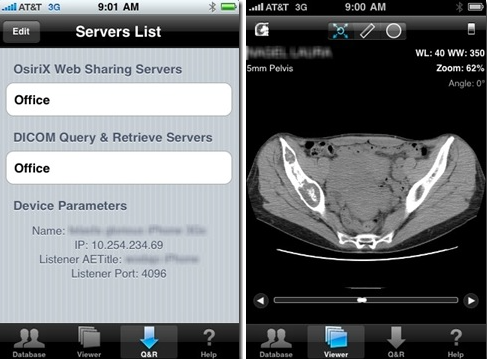