As a continuation in my series of articles on the iPad Pro for Medicine, I wanted to see if the iPad Pro’s stylus could be used to help with a lecture I was giving on Glaucoma. Apple calls the iPad Pro stylus the “Apple Pencil”.

While I was disappointed with using the iPad Pro for medical literature writing on Google Docs, I was surprised at how useful the Apple Pencil was for medical illustrations.

The Apple Pencil is easy to set up and use. My biggest concern with the Apple Pencil was how it would function with palm recognition. Anyone who has used a stylus on the iPad knows the biggest difficulty is trying to keep your palm off the screen. There are apps and styluses that have attempted to solve this problem before, but the Apple Pencil pulls this off flawlessly.  You can rest your palm on the iPad without having any multitouch issues. Writing on the iPad Pro is easy — making medical illustrations are even more fun.

For my Glaucoma lecture I wanted to illustrate to the residents how exactly Acute Angle Closure Glaucoma happens. I used an app called Paper by FiftyThree (free to download), and drew the below medical illustration. By no means am I even close to being artistically skilled, but I was able to use the Apple Pencil to easy draw what was happening with the key anatomy in the eye. The medical illustration itself took less than 20 minutes to make. The best part of making medical illustrations is the ability to write accompanying text with the images.

Overall the medical illustration made with the iPad Pro was well received and definitely made explaining Acute Angle Closure Glaucoma easier. Below is the illustration I made — it shows Acute Angle Glaucoma and the angle made between the Iris and the Cornea, while the other cross section shows what is supposed to happen with a normal angle. 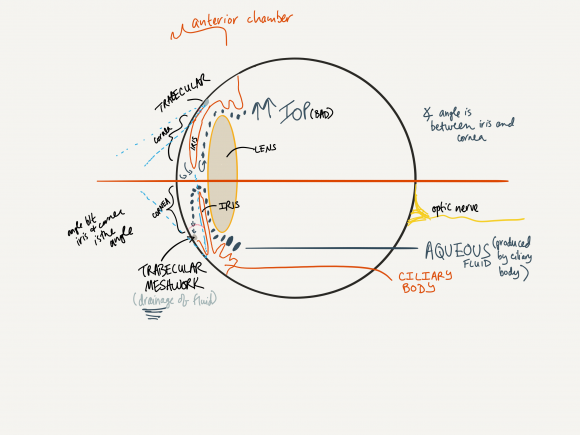