A team of physicians, developers, artists, and programmers are developing and testing a gaming app, Bandit’s Shark Showdown, to both improve recovery in stroke patients and maybe even make it fun.

There are a lot of stroke apps out there, from aids to help patients recognizing potential stroke signs to decision support tools for diagnosis. Featured in a recent profile in The New Yorker, neurologist Dr. John Krakauer expressed his frustration with the limitations of traditional post-stroke rehabilitation and hopes to unlock the potential of robotic therapy combined with cutting-edge interactive entertainment. He has helped found the “Brain, Learning, Animation, Movement lab”(BLAM), a “Pixar-grade” team of engineers, designers, artists and programmers that work with clinicians to use the best of art and science further research on the brain. 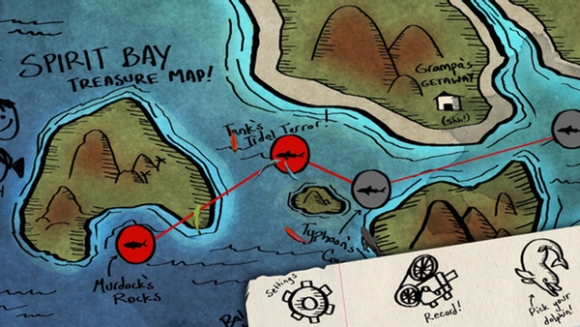 One of their studies involves investigating motor recovery as part of stroke rehabilitation. This is done through utilizing a combination of the game, Bandit’s Shark Showdown, with a robotic arm, the Hocoma ArmeoPower, to encourage intensive game-based therapy. Instead of traditional rehabilitation where the focus is often task-based, the focus here is simply on movement in a virtual environment, directing a dolphin through various challenges like battling dangerous sharks and other enemies.

Three members of BLAM, who also own an indie gaming company called Max and Haley, designed Bandit’s Shark Showdown. In fact, it wasn’t really designed as a medical app. Rather, they had already been in the business of designing apps based on animal movements and were working with the National Aquarium in Baltimore to design a game based on dolphin movements.

They’re also testing the use of Force Touch in the game according to an interview in the Verge. Players (patients recovering from strokes) have to apply varying levels of pressure to control their dolphin as it goes after sharks. They hope that this can help users work on balancing force and dexterity, offering yet another tool for recovery.

After a cerebral vascular accident, several mechanisms have been traditionally postulated to allow to motor recovery. These include neural plasticity with periinfact reorganization (undamaged regions of the brain taking over for damaged regions), diaschisis (regions remote from infarcted location are initially deactivated but later recover), and ipsilateral/contralateral hemisphere activity (inhibition and excitability) 1. The majority of motor recovery after a stroke is thought to occur within the first 3 months. This is an ideal time for Acute Rehabilitation, where a team consisting of a rehabilitation physician, therapists (physical, occupational, and speech), neuropsychologist, nursing, social workers and more attempt to maximize functional outcomes for post-stroke survivors.

Current approaches to therapy during this time include increasing attention to the affected paretic region, while in the past having focused on compensatory strategies. Techniques such as Constraint-induced movement therapy (CIMT) have been utilized, supported by recently published clinical trials.

However, as noted by Dr. Krakauer, the ability to provide enough high-intensity and frequency of such therapy may be limited in some post-stroke care environments. Apps offer an opportunity here and while there are many available, the quality of these stroke apps has been found to be lacking. Robotics offer an intriguing avenue to increase the frequency of such therapy and combining this with an immersive game, such as Bandit’s Shark Showdown, may offer even more benefits. The upcoming clinical trial of this technology through BLAM, with stroke patients at Columbia University and a clinic in Zurich, is certainly exciting and is one to follow for all interested in neuro-rehabilitation.