DuoFertility is a Fertility App and Wearable that Tracks Ovulation

DuoFertility mobile is a fertility system and service that claims to accurately predict and confirm ovulation with one-to-one support to help you conceive faster. We have created a list of the best fertility apps before, but DuoFertility is more of an overall platform — with a fertility app and a fertility wearable.

The fertility app, available for iOS and Android — is used in conjunction with the company’s wearable sensor, which when placed under a woman’s arm, collects heat flow, body temperature and movement. This data, which can be used in combination with cervical mucus observations, hormone test results, and menstruation patterns, helps users pinpoint the most likely time they can conceive. The system is designed to both predict ovulation and confirm it.

The fertility app provides users with a fertility report that describes what the sensor has been monitoring over time, visually representing individual menstrual cycles on the individual bars on a chart, dividing each cycle into its follicular and luteal phases. The sample chart shown on its web site explains states: “Since you have being using DuoFertility, we have measured 5 full cycles. Your cycles have been quite regular, lasting between 24 and 29 days.” Additional chart samples are available on the Google Play site.

DuoFertility cites studies to support the accuracy of the ovulation monitoring system. Rollason et al, for example, reported on the use of the system in 8 infertile patients between the ages of 27 and 40. The women, who had normal ovaries based on pelvic ultrasound, as well as normal luteinizing hormone, follicle-stimulating hormone and prolactin, used the monitoring system for one complete menstrual cycle. The accuracy of the DuoFertility system was evaluated by means of urine LH monitoring, daily transvaginal ultrasound, and serum progesterone. The researchers found that “DuoFertility identified ovulation as having occurred within one day of that determined via ultrasound in all cycles. The sensitivity of ovulation detection was 100% (95% confidence interval 82–100).” They were unable to arrive at a specificity rating. Obviously, this study has a small sample size, but the platform at least does have some data behind it.

While DuoFertility has a nice pilot study that showed promise, recently the FTC made clear that health apps that claim to provide any type of benefit need to have vigorous data to back up their claims. The FTC’s recent ruling emphasizes the need for DuoFertility to do further studies to prove their fertility platform works. 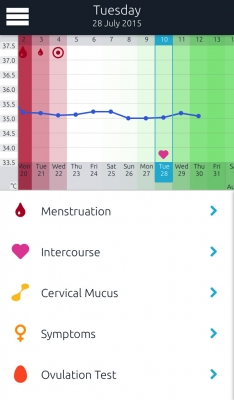