The evidence for using fall detection apps and wearables 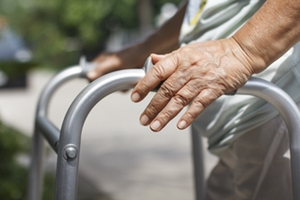 Every year, more than 700,000 patients are hospitalized because of a fall often with serious injuries including hip fractures and head trauma. Recently, there has been increased interest in bringing fall detection into the 21st century, automating fall detection using apps and wearable devices to get help for geriatric patients as quickly as possible.  We recently profiled the first fall detection app and wearable, SafeWander, that syncs information with a loved one remotely. A recent commentary in the Journal of the American Geriatric Society summarizing some of the key studies on fall detection apps highlights both reasons for enthusiasm and concern “1”.
Three studies are referenced within the published letter to the editor: A 2012 study out of the UK, a 2014 survey from Florida, and a 2014 systematic review on fall detection devices.

The UK fall detection study reviewed current fall-detection algorithms as applied to real-world falls in at-risk patients. They note most fall detection programs were tested on simulated falls, using healthy volunteers, or even martial art students, thus limiting such usefulness in recording actual falls “2”. Sensitivity and specificity of thirteen published fall-detection methods were analyzed, applied retrospectively to data collected from a variety of true falls recorded on accelerometer recordings. Interestingly, while these algorithms had reportedly detected simulated falls well, they had limited sensitivity (57-82%) when detecting actual falls, with considerable false alarms. The data on specificity (83-98%) was more impressive, with the writers concluding that a larger database of actual fall data from accelerometers recordings could improve current fall detection programs. This was also pointed out by the survey of current fall detection technology out of Florida “3”. They noted the age-related kinematic changes in gait may lead to a disparity in fall sensing.

Finally, the 2014 systematic review on fall detection apps and wearables, appearing in the Journal of Geriatric Physical Therapy, also referenced a lack of data on elderly use of wearables, defined to include all devices with accelerometer components “4”. Only 7% of studies reviewed in the article noted real-world, not simulated, testing of such devices. Further investigation shows for these using non-simulated testing, none utilized a smartphone-based application. Instead, various other wearable accelerometers were utilized, including a vest-based system, a patch with a remote sensor, etc. The referenced patch system was published in the Annals of Physical Medicine and noted similar limited sensitivity (62%) amongst patients.

This is undoubtedly an exciting frontier of mobile health and the increasing number of geriatric apps makes it quite promising. However, most of the current published research on such mobile applications appears in various engineering and biomedical informatics circles, with little clinical studies available. For a consumer, there are many free and paid fall detection apps, promising features such as emergency contact notification, Apple Watch integration, and geolocation. These may be found on both on iOS and Android devices. These include stand-alone apps and those syncing with external wearable monitoring devices. While intriguing, such applications really need further published clinical data to support their use, given the wide variability in detection standards. Hopefully, future studies will investigate such mobile applications as they possibly offer both patients and clinicians, yet another valuable tool in decreasing falls and related complications.