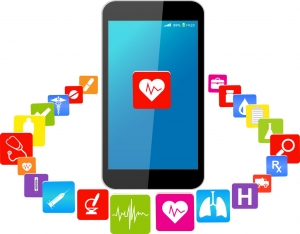 While a lot of hospitals have put out apps for their patients, A new report from Accenture estimates that as few as 2% of patients are actually using hospital apps.

In recent years, hospitals and healthcare systems have gotten very active in health & medical app development. On the research side, we’ve looked at the rapid release of more than a dozen apps using the ResearchKit platform since its launch in March. Among those apps, uptake has been robust in no small part because it lets researchers reach well beyond the normal catchment of their institution.

On the general use side, Accenture looked at apps from the 100 largest hospitals in the country. For example, Cleveland Clinic Innovations has 14 apps on the market according to App Annie including Heart Story, MyEpilepsy, Sideline Guidelines, and Cancer Trials. Specifically, they limited to “proprietary apps” which presumably means apps that the hospital developed and owns rather than apps like, say, MyChart for Epic.

In total, they found that 66% of hospitals have apps for patients but only 38% of those hospitals (or about a quarter of the total) have proprietary apps. By analyzing data from HIMSS Analytics, CDC discharge data, and app data from App Annie, they estimate that only 2% of these hospitals’ patients are actually using these apps.

Also striking was their analysis of functionality that these apps offered. In particular, they note that about 10% of these proprietary apps have patients most desired functions: medical record access, appointment booking, and refill requests. That may be translating to lower app store ratings too. The average among these apps was 3.6 out of 5.

These findings should, however, be taken with a grain of salt. First, they aren’t actually a direct survey of any hospital but rather an estimate based on other data sources on app usage and patient patterns. Second, they don’t really dig into these apps at all. For example, the proprietary apps being described may be apps developed by hospitals for more niche uses. I wouldn’t expect more than a tiny fraction of my hospital’s over patient population to download, say, an epilepsy app. While they compare the downloads & ratings of apps like ZocDoc and iTriage to these hospital apps (spoiler: they have more downloads), its really an apples & oranges comparison. Those apps can be used by anyone and are built to scale quickly across the country. A hospital’s app, on the other hand, may be targeted at its own local patient population or at a specific health condition in which that hospital specializes.

That said, I do think there is a kernel of truth in here, namely that hospitals and healthcare institutions are generally behind the eight ball on their mobile strategies. We’ve reviewed a lot of these apps and we often find ourselves praising their content but lamenting their design. Healthcare institutions need to do a better job of designing to their users’ needs and make their apps fun to use. Otherwise, the investments they are making health & medical apps are likely to just add to the general frustration that many patients feel while trying to navigate the system.