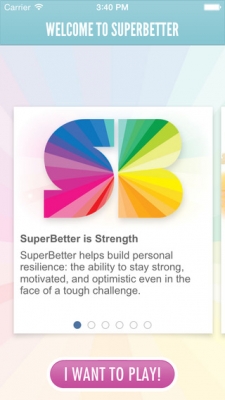 A recent study presented at the 2015 American College of Rehabilitation Meeting investigated the use of a smartphone app to reduce symptoms after a concussion with promising results.

We’ve recently seen a lot of attention on the use of apps to help manage concussions. NYU Langone recently launched a study using ResearchKit to better understand symptoms after a concussion. There are also a number of apps out there specifically targeted at screening for concussions.

In this study, patients aged 13-18 with a history of concussion and persistent symptoms were studied while using the app SuperBetter . Developed by one of the authors of the study after a personal history of a concussion, SuperBetter attempts to “gamify” real-world challenges, using a system of battles, rewards, and level progression.

To do this, SuperBetter features Power-Ups (such as “Chug a Glass of Water”, “Hug Yourself”,” Walk Around the Block”), Quests (“Think about your goals”, “Mood Boost” ) , and even Bad Guys (“Sticky Chair”,” Lazy Exercise Robbers”,” Self Critic”) along with unique, almost role-playing-game (RPG) mechanics. Players collect Power-ups, complete Quests, and gain skill points in Mental Resilience, Emotional Reliance, Physical Resilience, Social Resilience, plus overall skill levels. Finally, players may also unite with friends using the app to team up as Allies. There is an overall focus on Positive Health and Social Game Mechanics throughout the app, all to use the game to solve real-world problems, not just limited to recovering from a concussion or other brain injury

The concept of adding an interactive, game-style design to traditional therapy has received increasing attention. Partly driven by the plethora of mobile and console interactive entertainment options, such therapy has been utilized for other conditions, including PTSD, CVA, balance impairment, pain management, cognitive impairment, weight loss, and more 2,3. Still, there is little conclusive research to establish a novel form of game therapy as superior to more traditional interventions.

For this particular controlled intervention study, the Bad Guys were listed as symptoms of concussion (blurred vision, dizziness, light sensitivity), with PowerUps as Sleep, Sunglasses, etc. Study participants utilized the app once a day for 3 to 6 weeks. The adolescents were divided into two groups, 10 in the intervention group and 6 in the control group without exposure to the app. Final measurement outcomes included the Sports Concussion Assessment Tool-3, and Center for Epidemiology Studies Depression Scale for Children.

Upon conclusion of the study, they found all members of the intervention group had improved in both decreased symptoms and depression, with only half of the control group noting a similar improvement. With many adolescents and young adults are familiar with online role playing games, it’s interesting to see a similar approach taken towards symptoms management after a concussion.

While this small study has several limitations (including limited sample size and patient selection), it is still a noteworthy investigation into a novel approach to treating post-concussive syndrome amongst youth.. Further research utilizing gamification principles to improve rehabilitation outcomes is certainly exciting and hopefully will continue to be investigated. It would be interesting to see how linking the symptom tracking and improvements for a particular condition, in this case concussions, with providers would help improve overall outpatient therapy and tailor treatment goals.