The popularity of the Kinsa thermometer has shown there is definitely a subset of parents and general consumers who like having an iPhone or smartphone connected thermometer.  Vicks has launched itself into the arena of wireless digital thermometers with their Vicks Smart Temp device. 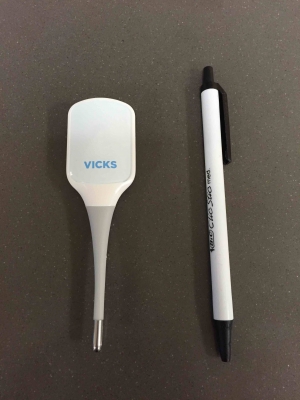 The Vicks Smart Temp app is free to download for iOS and Android and is essential for using the Vicks thermometer. When you open the app you are guided on how to pair the device with your phone via bluetooth. In order to pair with the device, you need to have iOS 7 or higher and Android 4.4 or higher.

The Vicks Smart Temp thermometer doesn’t work with all devices either. For Apple devices, it works on the following: iPhone 4S or higher, iPad 3rd gen and higher, iPod touch 5th gen and higher, and all models of iPad Mini. For Android devices, you should check with the Vicks Website to make sure the smart temp will work. 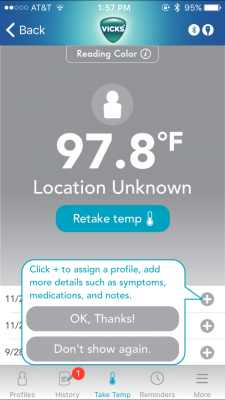 The app enables you to set up individualized profiles for family members and track temperatures taken. You don’t need to have the app open in order to take a temperature — the device can function independently — a feature I’ll talk more about later.

The Vicks Smart Temp app has obvious features, such as trending temperatures taken, color coded temperature results, and nice graphs that display fever curves. But the standout feature in the app is the ability to set reminders for medications.

As an ER physician, I often encounter parents who have a difficult time keeping track of when they gave Motrin or Tylenol.  We have an excellent “fever sheet” we give family members in our Emergency Room reminding them not only the dosage, but the times they should administer the medications. The app does not give dosing instructions, but does at least remind parents at what time the next dose is required based on inputs by the parent. This medication reminder section of the app is very useful for parents who are alternating Tylenol and Motrin. 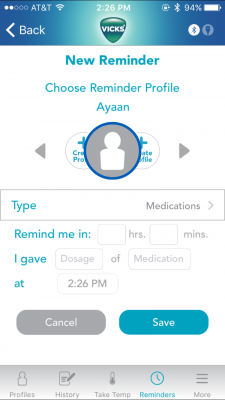 Overall, the user interface of the app is solid. When you are taking your temperature with the app open, you see a cool fluctuating thermometer on the screen.

From a clinical standpoint, I’m happy to see a specific indicator for the temperature source. I judge an oral temperature differently than a rectal temperature, and don’t trust under arm temperatures — so it’s nice to see Vicks has given the ability to label the source of temperature.

The Smart Temp app doesn’t connect to Apple HealthKit or the Health app. The ability to do so would have been great because it would enable other apps to connect and pull data from the Vick’s Smart Temp app.

The device itself is compact, and is battery powered. The battery is a standard circular CR2032 battery, and Vicks states it is designed to take 100 measurements. There is one button on the device that turns it on and off. You are able to take a temperature without the app open or the device actively being paired with a smartphone. 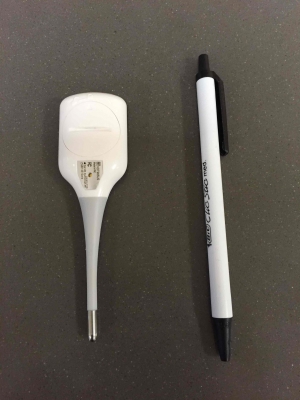 When you are using the Vicks Smart Temp independently without the app, you get a flashing red light that turns to a flashing green light when you place the thermometer in your mouth. The light turns to solid green and beeps indicating that the temperature has been recorded. That’s where the biggest flaw of this device comes into play.

My biggest issue with the device is the lack of external display. While the Vicks Wireless thermometer can store up to 10 readings and then display them all when it syncs with the app — there is no point in getting a temperature unless you actually know what it is immediately.

For example, if your child is with a babysitter and they are concerned your child is running a fever, the babysitter would have to download the app in order to see the temperature results. If your babysitter doesn’t have a newer iPhone or Android device — or even a smartphone — then they wouldn’t even be able to see the temperature result at all. The Vicks Smart Temp would store the measurements and you could view them later, but delaying treatment obviously renders the product useless in this scenario.

When it comes to the actual accuracy of the device we can’t attest to that at iMedicalApps.