Another Apple ResearchKit study has just launched, called mTECH. The purpose of the mTECH ResearchKit app is to study the long term health effects of energy drink intake. 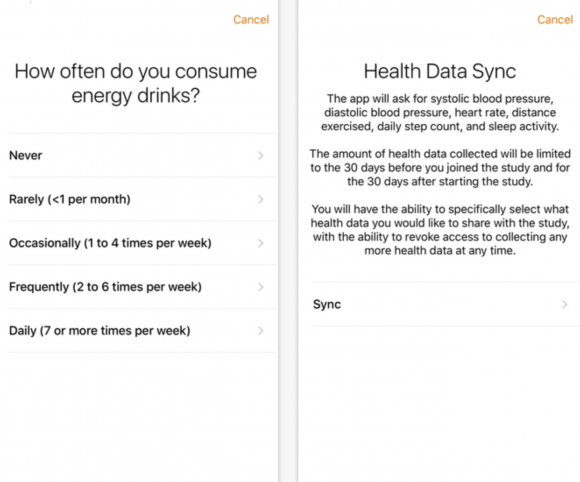 The mTECH ResearchKit study was created by researchers from the Thomas J Long School of Pharmacy and Health Sciences. The Principle investigator of the study is Saranpreet Nagra.

The mTECH app is free to download and anyone can participate in the study, even those who do not use energy drinks. Researchers hope to describe the effects of energy drinks on different vital signs and health markers — such as blood pressure, heart rate, activity level, and sleep.

The mTECH ResearchKit app will ask participants’ permission to their health data on their Apple Health app — such as the health markers mentioned already, and ask survey questions in conjunction with recording those markers. The survey questions will be based on the amount of energy drink usage. Researchers then hope to correlate health markers such as blood pressure and heart rate with energy drink usage not just in the short term, but also over a longer period of time.

We already know energy drinks cause elevation in heart rate, inhibit sleep patterns, and can cause high blood pressure — but the longer term effects of energy drinks is not as well known.

1) When someone stops using energy drinks, how long do their effects last?
2) If someone chronically utilizes energy drinks and then stops, are there lingering side effects?
3) Do energy drinks have different effects based on age or comorbidities?
4) Does an increase in energy drink usage actually correlate with increased activity levels?