Popular Mimi Hearing test app claims to be “most accurate”, but you’re not to use it for medical purposes?

The free health and fitness app, Mimi Hearing Test for the iPhone, is designed to help users test their hearing. This is a relatively new app, but has garnered quite a bit of attention and has several 5-star customer ratings on the Apple Store. Users have written how the app is helpful, non-intimidating, supportive and fun.

The Mimi Hearing app claims that users can test their hearing from their iPhone. It states that users can get results quickly, usually within the first 2 minutes. Sounds easy enough but are the results really accurate?

Users begin the test by finding a quiet place, inserting their headphones and clicking Quick Test. The app will instruct users every step of the way during the test. After both tests have been completed, Mimi shows a hearing landscape, which is a graph that demonstrates how users hear at specific frequencies. Apparently the Mimi app is calibrated to work with Apple EarPods and Apple EarBuds.

This has eerie similarities to one of the top grossing health apps, Instant Blood Pressure, that was recently removed from the iOS and Google Play stores. In that case, the app claimed to measure your blood pressure using just your iPhone’s camera and microphone — but had some nice disclaimers that countered it’s initial claims.

Even though developers clearly state that this is not a medical app, the app has still earned quite a fan base as shown by customer feedback. Unfortunately, it seems that there is no concrete evidence to suggest that the app accurately tests users hearing.

In reality users may or may not actually get accurate results. So is this app for real or just a gimmick? We have no way to know without any type of legitimate clinical studies to point to. Counter this to the strategy Opternative utilized. Opternative created a novel method to give eye prescriptions utilizing just a laptop and iPhone – they at least invested in doing a clinical study to show their technique worked.

The problem with popular apps such as Mimi Hearing is that although they often offer disclaimers — many users trust the accuracy of these results, even when there is no clear evidence they really work.

What about those people who have a legitimate hearing problem, and because the Mimi Hearing app did not detect it, fail to see a licensed medical professional? Just as alarming, what about those users who fail to read the disclaimers and think the app is medically based? Though this app is already available in the app store for download, until there is some type of evidence or clinical trial to show that it works we cannot consciously recommend that users rely on it to test their hearing.

With the popularity of the Mimi Hearing app it’s scary to think that some users might trust these results and essentially be relying on “pure luck” when it comes to their hearing. 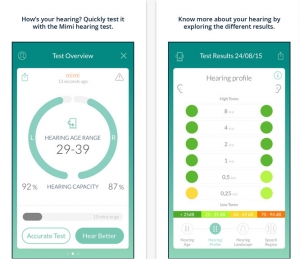