Medical app design for clinicians, how to make sure your app actually works 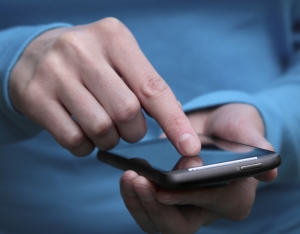 The majority of healthcare professionals, physicians in particular, own an iPhone. But when you’re developing a medical or health app, its important to remember that not everyone has the same device you do.

Continuing in our crash course series for healthcare professionals on developing medical apps, we’re going to look at one way to mitigate that challenge – by using emulators to test your app on multiple devices.

Start with your user base

Physicians and other healthcare professionals skew towards iOS devices such as the iPhone and iPad. That brings with it some convenience when you’re developing an app since there are only a few devices in that category and they all run the same operating system.

On the other hand, if you’re developing a medical app that is intended for patients, they are more likely to own an Android device. And that brings with it a ton of different devices of all sorts of shapes and sizes. On top of that, depending on the carrier, they will each be running different flavors of the Android operating system. As a result, understanding the ownership patterns in your target population before you start developing is critical so that you can make sure your app works on the devices your users own.

Testing on iOS via XCode

Emulators and simulators are programs that mimic actual mobile devices. For example, you can test an iPhone 6 on an iPhone 6 simulator on a computer. In addition, you can actually run your app on a simulator/emulator to show your friend or colleague. 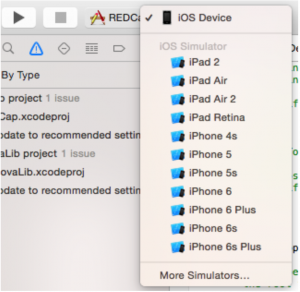 XCode in Mac has several simulators shown. Each of these mimics an iOS device. These devices are, in my experience, very effective debugging tools because they launch quickly and run accurately.

The biggest problem that I see is that they run with scrollbars. That is, their window does not scale to the size of the device. Sometimes you have to scroll down in the window to see the bottom of the screen. This is not a fatal flaw, but presentations to outsiders via the simulators can look ugly.

The Android SDK (downloadable via developer.android.com) provides some emulators that can be run via the android command from a command prompt (as in running cmd.exe from the Windows Start menu or Terminal on a Mac). This allows you to set up some emulators that can test your Android software. These emulators are mostly patterned after real Android devices. The problem is that these emulators don’t always (often) work, and when they do work, they work slowly. And when they work slowly, they sometimes are inaccurate.

Along comes BlueStacks. This emulator is freely downloadable from the Internet via bluestacks.com. It’s been downloaded over 90 million times, so it has been well tested. Personally, I have trouble finding inaccuracies on the BlueStacks software. Indeed, it is useful for finding inaccuracies in my software. The screen size can be disproportionate compared to Android tablets, but it’s a pretty good example of how to run an Android emulator on Windows/Mac. BlueStacks has access to the Google Play Store, so the emulator has access to your publicly available software.

Making the Most of It

Running an emulator has its advantages. At best, it is quicker to debug – if the emulator is accurate. It can also be great for presentations of your software. Indeed, with a portal like BlueStacks, it can even be an alternative platform for people to download your software on (especially if they need a keyboard).

At the end of the day, no emulator is perfect. So its important to remember that the work doesn’t end with the medical app release – having mechanisms to translate feedback from your users into fixes to the app is still crucial for success.