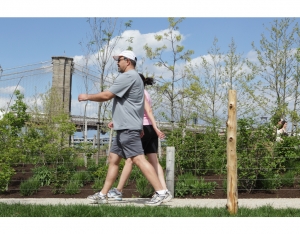 While there has been a lot of enthusiasm around the use of fitness trackers to improve health, many physicians have been skeptical due to a lack of high quality data supporting effectiveness or to guide use. The recently published mActive study – a randomized, blinded trial using smartphone-connected pedometers – from Johns Hopkins could help fill that void.

The plethora of fitness apps and activity trackers offer a unique avenue of promoting physical fitness amongst patients. The general population, especially amongst younger individuals, is increasingly interested in using technology to improve their fitness. Unfortunately, articles like this recent perspective from the MIT Technology Review titled “Your Doctor Doesn’t Want to Hear About Your Fitness-Tracker Data” (and later promoted on Gizmodo.com as “Your Doctor Does Not Give a Crap About Your Fitness Tracker Data”) offer a fairly bleak picture of physicians interactions with wearable health tech.

In light of this, it’s great to see further research into mobile activity tracker interventions for improving health like the recent study “mActive: A Blinded, Randomized mHealth Trial Supporting Digital Tracking and Smart Texting for Promotion of Physical Activity.” This study investigates the role of an electronic activity tracker, in addition to a personalized, automated text message reminder system to promote activity. The primary outcome measurement was daily step count, with 48 individuals enrolled over a 5-week period. Three study arms were utilized, a control (still wearing activity tracker, but blinded to data measured on it), experimental arm with unblinded tracker, and a second experimental arm using both the unblinded tracker and a smart text messaging system.

The two experimental arms both increased their activity, but the only significant increase in daily step count was noted amongst the second group that utilized the smart text message. The pedometer device used in the mActive study was the Fitbug Orb, a wrist-mounted actigraphy device. It appears to be somewhat similar to other popular activity trackers, such as the FitBit or MiBand, with a wristwatch form factor (although it may be mounted on belt clip and lanyard as well). Not only does this device track steps and distance walked, it also measures estimated calories burned and sleep. The Fitbug is compatible with iOS and Android, allowing users to track their fitness progress from their mobile device.

Perhaps the most interesting finding from the mActive study was that the mere presence of the actigraphy device did not promote enough activity on its own. While this is at odds with a several smaller studies (such as the recent SMART MOVE trial), it is fairly consistent with two Cochrane reviews on the topic focusing on workplace interventions and remote interventions more generally. Instead, they found that an activity tracker combined with automated text-messaging tailored to each user increased short-term physical activity (measured in daily step count) significantly, both over the control and over the non-text messaging reminder arm. It’s almost as if the text messages acted as a virtual coach throughout the day for the study patients.

These automated text messages are noted as ” written by the physician investigators and reflected behavioral change theories”, sent three times a day, and personalized based on physician-patient relationship. It’s easy to find information on the Fitbug Orb device used in the study, but the smart text portion of the study is more elusive-it’s not an existing app. Instead, the platform for this program comes from Reify Health (owned by Rock Health, a large venture dedicated to digital healthcare solutions), and has been used in at least one other clinical trial.

One has to wonder if a custom smart text reminder program, designed for each patient, is more effective than standard reminders and alerts built into many app-based activity trackers. Perhaps a future study will investigate the difference in these, taking into account the time and cost to create a personalized reminder system. Regardless, it is fantastic to see further research into the use of mobile health interventions to promote physical fitness.