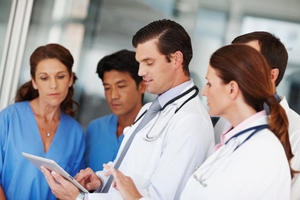 If you walk around any hospital, it’s obvious medical staff are using their smartphones frequently. Are they using them for patient-related information, or just general communication? Researchers recently conducted a study to answer these questions and more.

Raaum et al conducted a survey in 2014 on 43 emergency and 141 internal medicine residents from the University of Utah and the Brigham and Women’s Hospital. Their frequency of smartphone use for general features (e.g., emails, browser, instant messaging etc.) was compared with patient-specific/medical apps, stratified by residency year and training specialty.

Overall, they found that residents used their phones for general purposes two times more often than for medical purposes (72.2% vs 33.0%), and both general and medical app use were higher amongst third and fourth year residents compared with first and second year residents (75.1% vs 70.5% and 36.5% vs 31.1%, respectively). Internal medicine residents’ general use of smartphones was higher than that of emergency residents (74.6% vs 64.3%). Of those surveyed, 74.3% had 1-10 medical apps on their smartphone, 16% with 11-20 medical apps, and 9.2% had more than 21 medical apps.

Interestingly, 21.7% of those surveyed received some sort of training with clinical apps, and about half of those surveyed would like to receive formal training. Residency programs and medical schools can consider providing formal sessions on medical app use to increase usership and maximize resources. At iMedicalApps we have compiled lists of the best internal medicine apps, family medicine apps, and Emergency Medicine apps.

Medical apps that were most frequently used every day or every other day were medical calculators/clinical scoring systems (37.1%), disease diagnosis/management (32.0%), and electronic medical records (15.4%). In fact, medication formulary/drug references and medical calculator/clinical scoring systems were used several times a day in 47.4% and 33.1% of those surveyed. Other categories surveyed, including online videos of procedures, patient education, pill identification, procedure documentation, physician order entry, and photo/video of patients’ physical findings or diagnostic studies to share with a consulting colleague, were less frequently used.

This is an interesting finding because it suggests that medical residents are looking for quicker forms of medical confirmation and information, rather than multimedia formats that may be more time consuming to process during clinic. This is consistent with another recent review by our team on features of medical apps that lead to positive ratings.

While this study presents interesting information on emergency and internal medicine residents’ use of smartphones during clinic, future work should include comparisons with other specialties, such as those in primary care, across different institutions. Different devices, such as the recently launched Apple Watch, should also be compared to get a comprehensive view of how mobile digital devices are used in medicine.