Could the key to kicking your smoking habit lie in a game? According to a research group in the Department of Psychology at the University of Quebec, a virtual smoking cessation game did help some people reduce their nicotine addiction. Using medical apps that are centered around games to promote healthier behavioral habits is not unheard of, as shown by the currently available PlayForward app that aims to bring awareness and prevent HIV risk behavior in adolescents. Smoking cessation app research is getting millions in NIH funding right now and companies such as Pfizer are launching their own custom smoking cessation research apps.

The Cigarette Crushing app, a smoking cessation app, attempts to use gamification by using an interactive game to help people reduce their tobacco addiction. The smoking cessation app is based on an actual clinical trial by the Department of Psychology at the University of Quebec, led by Dr. Benoit Girard. For the 12-week psychosocial minimal-support treatment program study, 91 regular smokers were assigned to a virtual environment. The virtual environment was created using the eMagin HMD virtual reality system and a modified 3D game. During 4 weekly sessions while in the virtual environment, some of the participants crushed virtual cigarettes while others grasped virtual balls, which represented the placebo group. In addition, during each visit each participant received psychosocial support from the clinic nurses.

After the treatment program was complete, the research team looked at 3 main areas. Each participant was assessed for nicotine addiction using the Fagerstrom test, abstinence rate, which was confirmed by measuring exhaled carbon monoxide, and dropout rate. Results showed that those participants who crushed virtual cigarettes during those 4 weekly sessions had a significant reduction in each of the 3 areas when compared to the group that grasped virtual balls. The rate of abstinence reached 15% for those who crushed cigarettes versus 2% in the placebo group. From the results Girard and his team theorized that the therapy, in conjunction with the reinforcement of crushing the cigarettes, was a possible reason for their treatment success.

The Cigarette Crushing app is available for $4.99 on the Apple Store. The object of the game, just like the name says, closely follows the game used in the study. When you open the app users can choose to learn about the app or begin playing. The “About Page” talks briefly about the purpose of the app and provides information about how to find the original study that was published in CyberPsychology and Behavior. It also provides some useful information about how to work the onscreen controls and most importantly crush the cigarettes.

Once you click on play, you can choose between Levels 1-4 with 1 being the easiest and 4 being the hardest. You must use the controls to navigate through the area and crush every cigarette that you see. The area looks like an outside courtyard, but it is set up similar to a maze. You can go several different ways but depending on where you turn it might be a dead end. The cigarettes seem to be just floating in the air, and they are located throughout the area.

When you find one, you grab it and break it. Each level is timed and you have a different number of cigarettes to find before time expires. Level 1 starts out by giving you 25 minutes to find 25 cigarettes, but as you move to a higher level, you have fewer cigarettes to find. The catch is they can become more difficult to find, and you get less time. By the time you get to Level 4 you just have one cigarette to find but only 2 minutes to navigate the entire area and locate it.

There are so many different ways you can go within the courtyard-like area that it can seem like you are going in circles which increases the difficulty. The various levels could definitely bring out the competitive side of users as they try to get a high score. The extra motivation and the goal of the game could also be a positive influence for some users.

However, the Cigarette Crushing app is lacking an important piece that the study incorporated and that is support therapy. Tobacco use is very addictive and breaking away from nicotine is not easy. In addition to the game the psychosocial support that participants received was just as vital in the study and essential for smoking cessation. So users shouldn’t download this $4.99 smoking cessation app thinking it will yield the same results as the clinical trial — it’s not the same.

The Cigarette Crushing app continues to show how virtual reality is being used in the medical field in different ways. 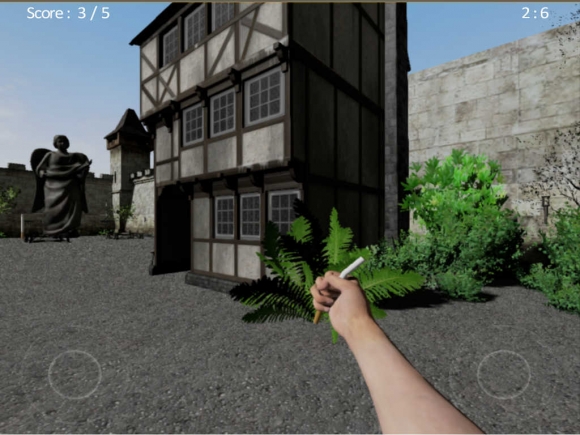 Brian has a PhD in integrative biology and disease for his research in exercise physiology and rehabilitation. He is also an eighth-year student at the University of Southern California pursuing his Medical Degree. He is the founder of Health Stories for Kids.