For years trainees have asked what are the best “pocketbooks” for the wards and/or the ICU? Prior to the internet and age of apps, trainees would fill their white coat pockets with copies of the Washington Manual, Ferri’s, Mass General’s Pocket Medicine and the like. Now some “carry” the digital versions of these textbooks, while others have migrated to “hunting” tools such as UpToDate, Dynamed or Essential Evidence Plus. Some app developers have even designed their own “pearls” books such as the excellent FP Notebook and the FOAM network’s Critical Care Compendium.

The latest edition to the hospital ward pocket guide pack is the Johns Hopkins Osler Medicine Survival Guide. Named for one of its founding fathers, William Osler, the latest edition to the Hopkins lineup from Unbound Medicine is focused on the wards. I am sure that Dr. Osler would have loved to have had a digital reference like this in the 1890’s, but now the competition for pocket references is fierce. Here at iMedicalApps we have been big fans of many of the Hopkins apps especially their outstanding ABX Guide–the infectious disease app of choice in our opinion.

The Osler Medicine Survival Guide attempts to provide the members of the ward team a comprehensive reference. The app is not written by the same authors as the Hopkins Osler Medical Handbook and unfortunately is not as comprehensive as that pocketbook. The app is written by the house officers at Hopkins and has an over 21 year history! The senior residents at the Osler Medicine Residency maintain the data for the app.

The program provides a video describing the history of the app and how it is used at the program. The app contains 12 core medical categories ranging from cardiology to neurology with numerous subtopics. My biggest reservation about the app is the lack of detail in many of these subtopics. When you have quick access to definitive detail from UpToDate and Dynamed, apps such as the Osler Medicine Survival Guide tend to come up short. Granted the app is significantly cheaper than either of those references.

Let’s try out the Hopkins Osler Medicine Survival Guide to see it in action.

Login to iMedicalApps in order to view the following video review of Hopkins Osler Medicine Survival Guide. Registration for iMedicalApps is free.

Hopkins Osler Medicine Survival Guide covers the gamut of common ward topics and is written by reputable authors from one of the leading institutions in the country, but the app lacks the detail needed to truly take care of patients at the point of care. The app is well referenced, but may not be enough information for those looking for more detail like that found in UpToDate or Dynamed Plus. 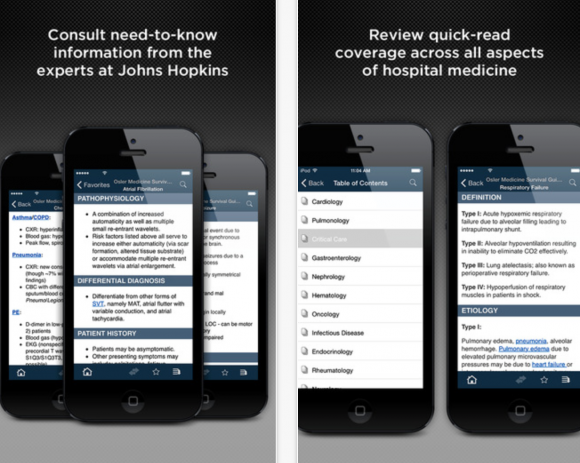