A few years ago, the mark of a medical trainee was a white coat with pockets filled to the brim with quick reference cards and books. The more you advanced in your training, the lighter your pockets got.

We’ve seen a lot of these reference resources make the jump to mobile with smartphone apps with varying success, whether it’s a universal antibiotic reference or an institution-specific handbook.

Resident Intern Cardiology Companion is an app developed by Dr. Christopher Martin, a former internal medicine resident at the Hennepin County Medical Center. He developed this quick reference for cardiology based loosely off a survival guide used at his training program.

The app walks users through a variety of cardiology topics, organized by Conditions and Reference. Navigation feels awkward and takes some getting used to – tapping Conditions pops out a left sidebar & Reference pops out a right sidebar. 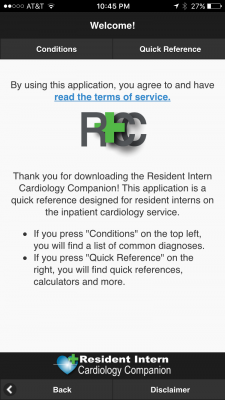 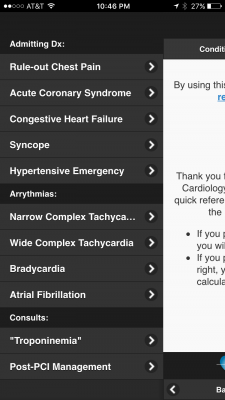 Conditions includes common cardiac complaints that trainees will encounter, especially internal medicine and emergency medicine including chest pain, ACS, syncope, and so on. Each area includes a basic, “intern level” outline of the approach to patient evaluation, from H&P to plan. Several key intern-level points are highlighted, such as giving chewable ASA in ACS or not being shy about getting EKGs. 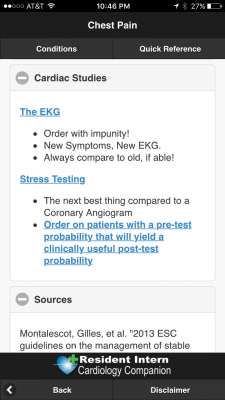 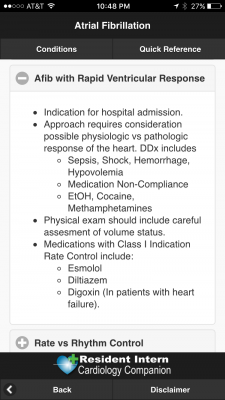 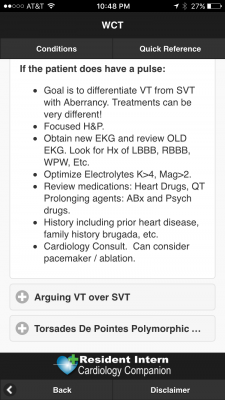 Quick Reference covers a range of topics including common cross-cover issues like managing electrolyte imbalances, an ACLS review, and diuretic conversion tables. There’s also an EKG reference section that’s nicely organized into an approach for actually reading the EKG systematically (rate, rhythm, intervals, axis…). Finally, in a particularly nice touch, there’s a section on auscultation that includes audio of common murmurs and tips on differentiating cardiac pathology (e.g. HCM vs. aortic stenosis, describing pericardial rubs, etc). Finally, I loved that the ACLS section started by reminding interns to take their own pulse – it’s a nice example of the theme of combining the art & science to help guide interns & students in their approach to these clinical issues. 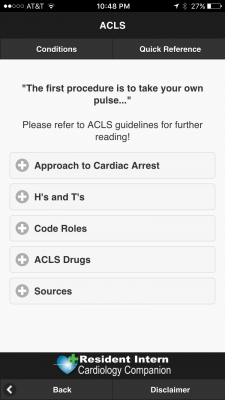 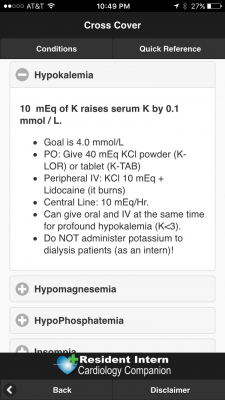 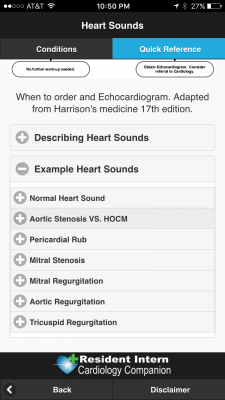 A real strength of this app is that it’s clearly written by people who have “been there” recently, so it’s written at the right level for the intended audience.

A limitation, though, is that several of the recommendations are clearly reflective of practice at one particular institution. For example, in my training, morphine was frowned upon by many when managing suspected ACS, digoxin took a back seat to amiodarone in atrial fibrillation with RVR, routine iron studies were not part of a cardiomyopathy workup, and cardiac CTA was an option for low risk chest pain evaluation. 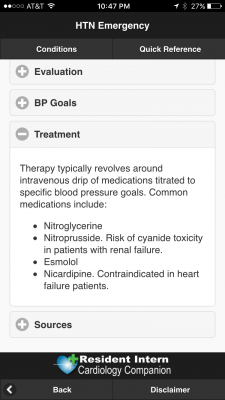 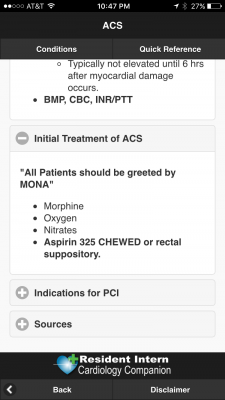 Most sections include a source that the information was pulled from, with the exception of some Quick Reference topics like the cross cover electrolyte repletion guidelines though to be fair that’s probably in all trainee handbooks and I’d suspect 99% of us don’t know what that’s based on. I did note that some references were out of date – the atrial fibrillation guidelines referenced are from 2006 and the NSTEMI guidelines from 2012. Both of those areas have more recent versions of the referenced practice guidelines.

Per Dr. Martin, the content was reviewed both by residents (as beta testers) and internal medicine faculty. We’d really like to see some of those reviewers named within the app to help make the content, particularly the suggestions around plans, more credible.