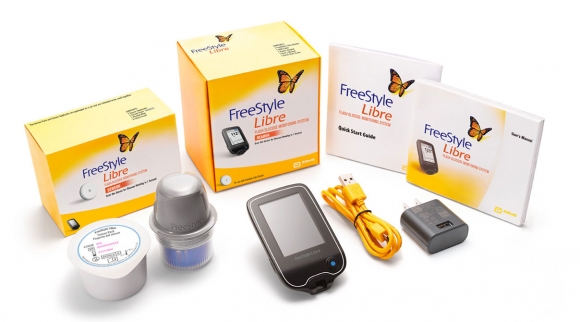 Patients perform a 1 second scan by placing the device close to the wearable sensor to obtain their current glucose reading, a trend arrow that tells them in which direction their glucose levels are going, as well as an 8 hour glucose history. (The glucose reading device should be held within 1 to 4 cm of the sensor.) The sensor is only 35 mm by 5 mm and can be worn under one’s clothing. It can remain on the patient’s skin for up to 2 weeks and is water resistant. According to Abbott, the monitoring system measures interstitial fluid glucose levels and is intended for adults 18 years of age and older.

DiaTribe, a non-profit organization that offers education and support to patients with diabetes and prediabetes, says the FreeStyle Libre received a CE mark in September 2014 to market the device in Europe. It’s not yet approved in the United States. FreeStyle Libre is “accurate enough from which to dose insulin, with performance similar to Dexcom’s G4 Platinum CGM… and it gave an excellent picture of glucose trends through real-time and on-device reports,” according to DiaTribe. The non-profit group tested the new system by having one of its staff members use it to monitor his blood glucose levels over time. He found that on average it varied from readings on a traditional blood glucose monitor by only 12%; it varied by 13% when compared to the Dexcom G4 system. Abbott recently completed a trial to satisfy US regulators; Diatribe anticipates the new system will reach the US market by mid-2016 at the earliest.