Unless you live under a rock, you are aware that the United States finally joined the rest (most) of the free world in transitioning from ICD-9 to ICD-10 on October 1st. This transition was predicted to affect every part of every provider’s practice from documentation and billing to referrals and software upgrades. Many had been equating the countdown to the transition to a doomsday clock as fears of prolonged charting, billing complications, and lost revenue ran amok in the press. How has the transition been for you? In our Department of the Defense Electronic Medical Record, the transition hasn’t been as bad I would have thought. Many of our “old codes” don’t translate and that forces you to “hunt” for the new ICD-10 code. Many codes seemed to transition to the new codes without much problem. Our nursing staff has struggled with some of the documentation they do for their share of work including procedure and vaccination codes that have changed.

The app store has well over 100 coding apps! Previously here on iMedicalApps, we reviewed an app from trusted app developer, Dr Evan Schoenberg called ICD10 Consult. We liked the app’s simple interface, good explanation of the ICD-10 changes, and ability to convert ICD-9 to ICD-10 codes. However, we weren’t fans of the app’s somewhat complex interface and had some questions about the source of the coding data used by the app.

Since then, even more ICD-10 apps have come on the market including ICDEasy. ICDEasy states it is created by physicians and comes from GT Games, LLC. Looking at their other apps, the company makes a variety of games and one music app. ICDEasy is their only medical app in the iOS app store. I was unable to find much detail about the app on their website, Facebook or Twitter feed.

The app includes predictive typing for thousands of medical codes to help ensure proper reimbursement. You can search by the ICD-9 code, the code family or keywords. The search function even works offline. Finally, the app includes the ability to translate ICD-9 to ICD-10 codes wherever possible.

Let’s try out ICDEasy to see how well it helps code some common outpatient encounters.

ICDEasy appears to include all of the ICD 10 coding information one would need for rapid coding at the point of care. The app does not cite where the coding documentation comes from as it lists no references.

Nurses, clinic administrators, residents, mid-levels, any staff or provider who sees patients and codes for their work. 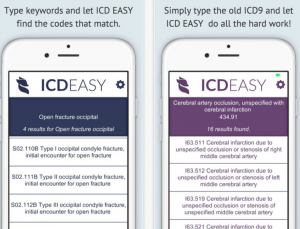