The Nightscout project is a good example of how the determination and work of one can spark a movement. Nightscout is an open source, DIY project that enables users to have continuous glucose monitoring (CGM) in the cloud. Users have access to the CGM data via personal websites, smart watches, apps and widgets that are available for smartphones. Nightscout was the brainchild of engineer John Costik as a way to monitor his son’s blood glucose after his Type 1 diabetes diagnosis, but soon other parents and engineers brought their skills to the software, and the community was born.

The Nightscouter app was just released in the Apple Store, to retrieve data from existing Nightscout enabled websites and allow users to view CGM data on their iOS devices.

We’ve mentioned before how there is a shortage of companies that enable diabetics to access their glucose/pump/sensor data. Along came the #WeAreNotWaiting hashtag, starting a movement — Nightscout was born. For Nightscout users, there are several ways they can use Nightscout wirelessly depending on the type of Dexcom receiver used as well as the type of phone, iOS or Android, which will upload the data to a server or database. Users can then set up a Nightscout site to view the information. The new Nightscouter app is designed to retrieve that data from any Nightscout enabled website and users can view them all at one time on their iOS devices.

The Nightscouter app does not add greatly to the current features that are available for Nightscout but is does add a little more convenience for iOS users. Currently, Nightscout data can be viewed through web-based interfaces on a smartphone or smartwatch that users must setup and log into. The Nightscout app that has been on the market for several months already allows users to view their Nightscout web page directly from the app.

The Nightscouter app takes it a step further and retrieves all the data from these Nightscout enabled devices which keeps users from having to log constantly into the database. All of the data is readily available in one location, which makes it easier to track the information, but that’s about it. The app is not designed to treat diabetes but for Apple users it could be helpful for tracking blood sugar in kids or adults. Nightscout users still have to set up their monitoring CGM the same way, and they have access to the same information but perhaps just a little easier. It should also be noted that the developer mentions how the app should not be used for the treatment of diabetes — possibly trying to explain the app should be used with caution.

The Nightscout project continues to grow and add features. Its ability to work with both iOS and Android as well as the Apple Watch and the Pebble Smart Watch allow it to fit a wide variety of users. Though it was the first of its kind on the market, diabetic manufacturers such as Dexcom and Asante have followed suit with work on products that will allow users to control and view data on their smartphones. Dexcom has an Apple Watch glucose monitor app as well. 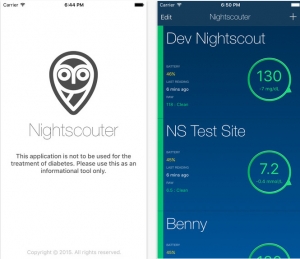