Review of Accupedo for Android and iOS

Encouraging increased activity amongst patients to promote physical health and well-being is a frequent challenge encountered by physicians. Designing a program with reasonable goals for physical activity and tracking one’s progress is very helpful, yet finding the right one can be a challenge. Many apps for Android and iOS  offer a variety of exercises routines, activity tracking, and more however, often the most useful tool to promote physical activity may be as simple as a pedometer on a smartphone. Accupedo is one such app, offering a variety of pedometer-related monitoring tools. With this in mind, I have given Accupedo a literal test run on my own Android device and have been pleasantly impressed with its capabilities. 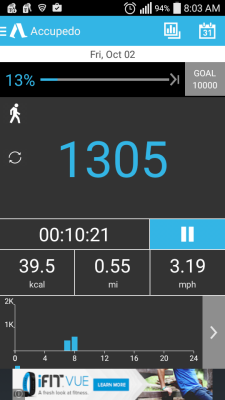 Pedometers have existed since the 1700s, with various iterations consisting of a mechanical switch being activated with each step and an output reporting mechanism. Recently, more advanced models consisting of accelerometers to detect movement have been developed. Given the reliance of many smartphones on accelerometer technology, it is no surprise that many pedometer apps have appeared on both Google Play and iTunes. Accuracy has been found to be boosted when used in combination with built-in GPS tracking as well, and is even comparable to traditional pedometer tracking, if not better.1 However, very few have appeared by name in clinical studies investigating effect on patient activity, helping set Accupedo ahead of the pack. In addition to smartphone apps, many popular fitness tracking devices include pedometer technology through actigraphy, such as the Fitbit, and have virtually replaced traditional mechanical pedometers on the market. 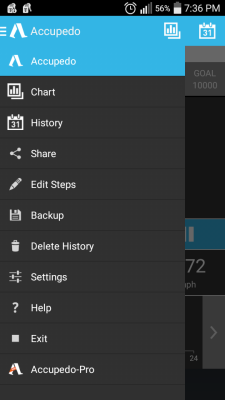 The first thing I noticed with Accupedo was the attractive interface. The user is immediately greeted by a step-counting tab featured in the middle of the screen, with time tracking, calories burned, distance traveled, and average speed all displayed. At the bottom of the screen is a progress bar showing how close to a set goal the user is, in addition to a percentage bar at the very top of the screen. This is basically all one needs to see to track their progress in one easy to read tab. 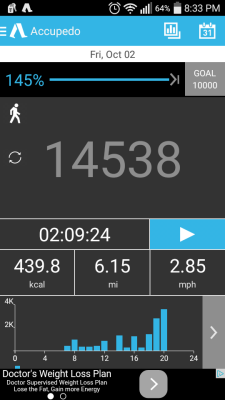 Tapping on the left drop-down menu allows the user to access chart records of the past activity (organized into Day, Week, Month, Year), edit past data (don’t cheat!), share their accomplishments on Facebook or via email, backup the data (export or import to/from SD card or Google Drive on Android), and access the Settings menu. Users can adjust the units for metric or standard/English units, and must initially input their height, weight, and gender for accuracy. They can also edit the goal steps (set at 10,000 by default), connect with MyFitnessPal, and set notifications when daily goals are reached. Also, “Smart Messages” or motivational messages can be turned on to help encourage users as well.

Accupedo needs to be running in the background for steps to be measured, but doesn’t need to be the only app opened and displayed for it to work. Whenever using a mobile pedometer app, concerns about impact on battery life are frequently raised. Accupedo allows the user to adjust step count on 3 levels, balancing battery consumption against step count accuracy. I had mine set on “Balanced” and did not notice a large increase in battery usage. Users can also set Active hours with daily start/end time options, plus adjust the sensitivity level of the monitor. 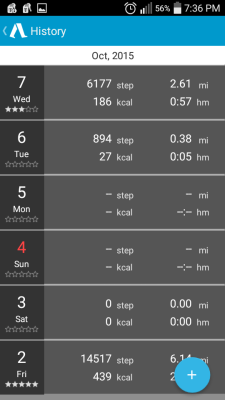 I compared the accuracy of Accupedo against my wrist activity tracker, with stairs, running, jogging, and walking. Both devices reported fairly consistent numbers, with less than a 10% difference, likely from device location. The developers note that the phone app may not track best if the mobile device is placed in loose pant pockets and performs best with tracking if worn on a belt (similar to a traditional pedometer). Overall, using Accupedo to track my steps and estimated calories burned was relatively easy to do. It added a “gamification” experience to exercise, helping me stay aware of my progress throughout the day and eager to meet the daily goal. 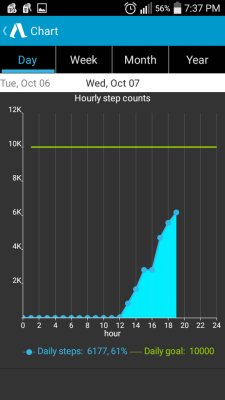 Evidence Behind the App

The SMART MOVE trial, conducted by the National University of Ireland and University of Aberdeen, used Accupedo while attempting to see if an app could increase baseline activity levels (recently covered by iMedicalApps here). 90 patients were randomized to intervention with Accupedo (no competing interests or funding by the app developers reported), or control (with the app as well but hidden on their smartphone so tracking data was reportedly not viewable by the patient), given upfront education, then monitored for their activity over a 2-month period. Patients using the visible app were found to have a 22% increase in activity levels (measured through step count). The study also included considerable subjective feedback from patients, with reports of improved awareness of exercise, improved goal setting for exercise, and increased confidence to achieve. Take for instance the following quote from a patient in the study:

‘Because you’ve got the instant feedback to see how you get on, so that’s how it was different because it had a focus. It just tuned you in and it got you into the type of the pattern and the routine of having the focus and … well it was much easier to get into a pattern or routine with this focus and getting the feedback, and getting “yes I achieved a target today” or “I’m nearly there”.2

Brian Chau is a Physical Medicine & Rehabilitation (PM&R) physician. He practices at the VA Loma Linda Healthcare System, and is an assistant professor at Loma Linda University Medical Center in California. Drawn to the field of PM&R for its focus on helping patient's improve their functional abilities, his interest include the use of virtual reality in rehabilitation and mobile health technology. Outside of medicine, he enjoys spending time with family, hiking, and fishing.