Nationwide Children’s hospital, located in Columbus, Ohio and considered by many to be one of the best pediatric hospitals in the country, has released an app called Physician Connect.

They have released other notable apps in the past — myChildren’s and My Residency — relatively novel apps when you consider hospitals do a poor job of developing apps in the mobile space.   Although another children’s hospital — CHLA — just launched an interesting sickle cell disease study app.

Unlike the My Residency and myChildren’s app, their Physician Connect app isn’t that easy to use. Initially I was excited when I read the description because the app mentioned how you could make direct patient referrals within the app — very cool. But after a registration process, you realize the app is basically just a wrapper for the website.

Some of the key things the Physician Connect app does:

Almost all the tools in the app can be better accessed on the Nationwide website. The website itself has a great user interface and offers a lot of functionality. I’m not a fan of apps that make you feel like you’re using a web browser within the app, which is the case for Nationwide Children’s Physician Connect app.  It’s unfortunate since the app offers great potential to connect with pediatric specialists on your phone. 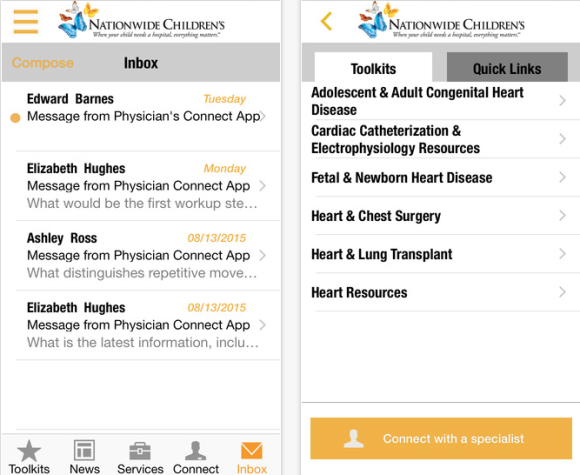