We’ve written about sketchy health apps in the past, but DetectsFever probably takes the award for the most outrageous. DetectsFever, produced by app developer Calvi Alfredo, promises to measure your temperature by measuring your heart rate.

While it’s widely known that when patients are febrile they are often tachycardic, there is no specific absolute numerical correlation between a febrile state and heart rate.

In the past we wrote about how these apps do surprisingly well in the App Store. The Instant Blood pressure app that claimed to measure your blood pressure by using your iPhone’s camera and mic was one of the highest grossing health apps ever until it was finally taken out of the Apple and Google Play app stores.

Apps that promise to measure your blood oxygen concentration using just your iPhone also do very well in the App Store — yet have no legitimate evidence to back up their claims (Currently the Pulse Oximeter app has hundreds of reviews and is still available for download, even linking to Healthkit!)

DetectsFever takes the award for most outrageous due to the lack of any type of legitimate disclaimer – merely stating that it doesn’t replace a thermometer. At least the Pulse Oximeter app by DigiDoc knows it shouldn’t be used at all, and states at the very end of their iTunes description that the app shouldn’t be used for clinical purposes (that won’t stop them from profiting from it of course).

I’m always terrified when I read the reviews of these apps. The following screen shot of the reviews shows how people are using this app for their health and even others’. The most terrifying user review is the one where someone is using the app for their granddaughter — wow. 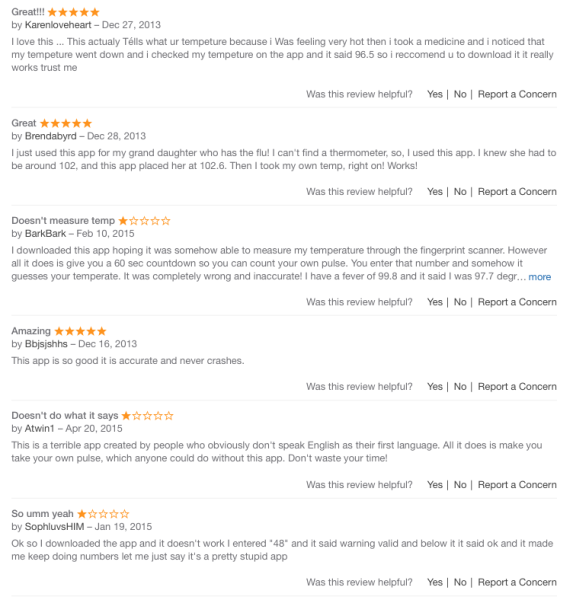 I always wonder how apps like this manage to make it into the Apple and Google Play App Stores. I especially wonder about the Apple App Store when it’s widely known how much scrutiny iOS apps go through before they can be published. 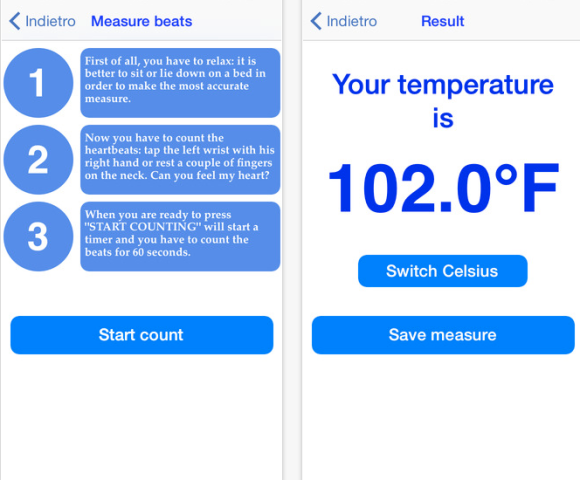